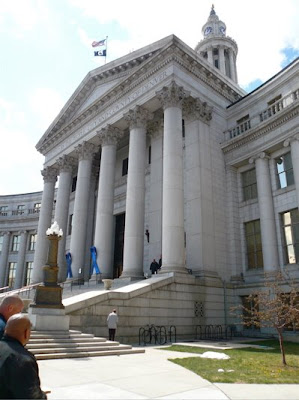 So this is where I spent the day yesterday, at the City and County Building on jury duty. 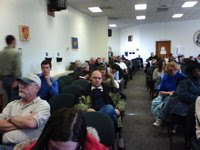 I've done jury duty here before, and it was a pretty short trial, so I had my fingers crossed. The odds were in my favor; most of the trials are 1-3 days.

I had a book with me but wished I'd brought an iPod, too. Still, I didn't have to wait very long before 18 us were taken down to County Court. Six people were needed for a criminal case lasting not more than a day and a half, and possibly only a day. 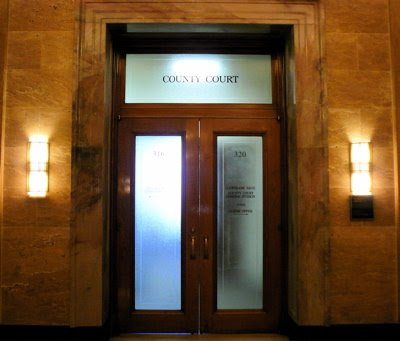 Then the defense attorney asked, "Would you say my client is more guilty or innocent at this point?" The potential jurors hemmed and hawed. He looked at me (I'd already established myself as a loudmouth). "He's innocent! He has not been proven guilty of anything." The defense attorney beamed.

Well, I was really kind of hoping I would get a nice afternoon off, courtesy of the prosecutor, but it wasn't to be. 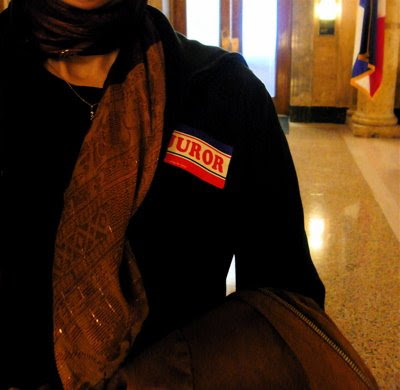 So, the case. Total Jerry Springer. A whole bunch of he-said-she-said, screaming, cussing, rock-throwing, hoe-jabbing (or was it a shovel?) and dueling 911 calls. One count of third-degree assault and three counts of menacing.

The judge was quite gracious through it all, whereas I would not have near the patience. Imagine hearing cases like that all day, every day. 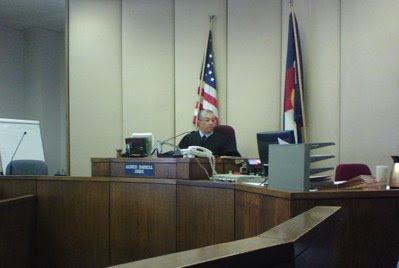 When all was said and done, the prosecutor didn't have a case at all. Talk about your missing pieces. The witnesses (who were also the plaintiffs) all contradicted each other on some very basic points, but were suspiciously consistent on the one "threat" that supposedly justified the menacing charge.

I ended up feeling pretty sorry for the defendant. He actually had a pretty good case to have the plaintiffs charged with assault. His attorney was embarrassingly inarticulate, too, but the facts of the case spoke for themselves. 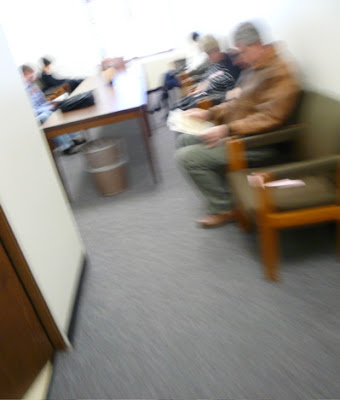 We had a couple of breaks where we could wander the halls or sit and read. When it came time to actually deliberate, that took all of 10 minutes. We were all agreed except on a couple of minor points arising from misunderstandings. Once that was cleared up, we headed back to the courtroom and I got to read out the pronouncements of "Not guilty" on all the charges (yeah, guess who was forewoman).

It was a very interesting day and I'm glad I had a chance to serve once again. We always joke about ways to get out of it, but it's not really that hard, and it's what makes our justice system one to be proud of. If that were you in the defendant's seat (or the plaintiff's), you'd want some critically thinking jurors sitting there, too. Wouldn't you?
Posted by Kitt at 12:11 AM