The French 75: Elegance with a kick 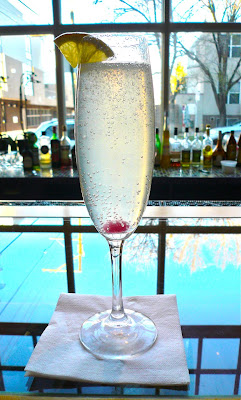 The Sergeant loves to reference the French 75 as the icon of a dissipated and bygone era – the drink that F. Scott Fitzgerald preferred in Paris, and probably Hemingway as well. It's named for the French 75mm artillery gun of WWI.

When Stir Cooking School offered the French 75 as a special for the Paris Nights cooking class, you know I had to have one.

Recipes vary, but the basic ingredients are, roughly:
(Note: if your glasses are smallish, you should halve these amounts.)

Shake the first three ingredients with ice, strain into a collins glass or champagne flute, then top with champagne or sparkling wine.

Garnish with a lemon wedge and, if you like, a cherry jelly bean (or was it cinnamon?). The bar was out of cherries, so this was bartender Tyler's intriguing substitute.

I'm definitely keeping this cocktail in mind for a group occasion, when I can justify opening a bottle of bubbly. It's mighty tasty.

P.S. I just made eight of these in smallish flutes, halving the amounts, and that used up most of a bottle of champagne and the juice of about 5 lemons. Also, the half-strength is still strong enough to kick!
Posted by Kitt at 11:40 PM

Email ThisBlogThis!Share to TwitterShare to FacebookShare to Pinterest
Labels: cocktails