Last week I got a call from a guy who had a swarm move into a pillar on his front porch and start building a hive. "I've got grandkids. I can't have bees there." I reassured him that the bees weren't dangerous and said I'd try to find someone to help remove them. That someone was Michael, with his BeeVac. 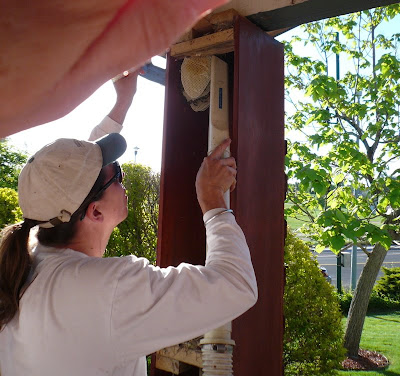 Yes, a bee vaccuum. Who knew? The first time I heard of it, I laughed. It's got enough suction to pull a bee in, but not enough (you hope) to really injure her. 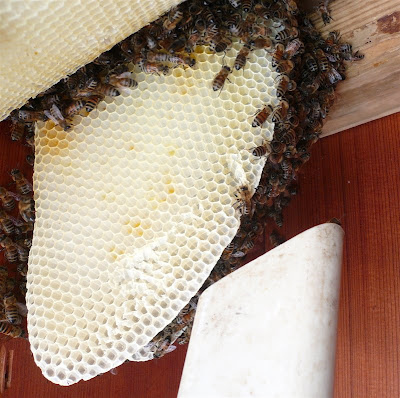 Some people refuse to use BeeVacs, preferring instead to remove the comb and string it up in a hive box, then brush as many bees in as possible and wait for the rest to follow on their own. That would have been very simple to do in this case (and saved the bees' work for them), but I can see the appeal of expediency.

Michael does try to be as gentle as possible.


Bees that are established in a spot are usually trickier to remove than a swarm because they have a babies and stores to defend, and may have built out a significant amount of comb that will need to be removed as well. If you leave the comb behind, it will attract all manner of pests (including, possibly, another swarm of bees). 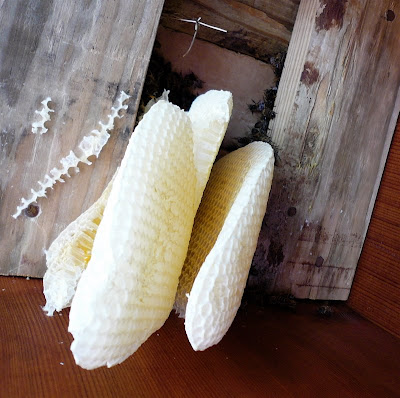 But these girls were very mild-mannered. Neither Michael nor I was wearing any protective gear, nor did we need it. Emptying the hive took about 45 minutes. The girls were all together and headed off to a new adventure in someone's backyard hive. 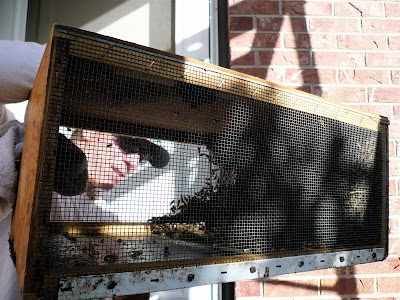 I felt sorry for them in their undoubtedly great confusion.

As Michael was putting everything away, I saw workers coming in from the field with full pollen baskets, alighting on the pillar and looking completely lost. Can you imagine?

Happily, when Michael realized it was more than just a few bees, he hooked the vac up again and was able to nab a couple dozen stragglers. 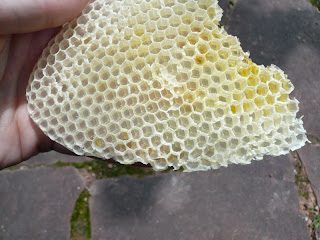 Here's some of their comb. It's so new and white! Older comb turns yellow, then black, as countless bees walk all over it. Some of this comb had honey in it, other parts had pollen.

And the honeycomb that looked empty was anything but. I've enlarged a section for you: 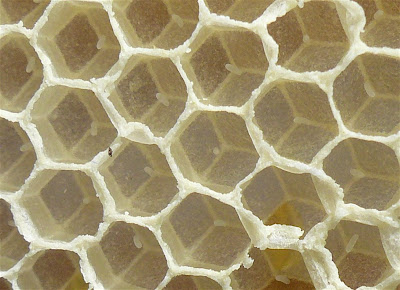 You can click on the picture to make it even bigger. And what do you see in each cell? That's a bee egg! The queen was a busy girl.

And I hope she and her workers are now happily settled in again.
Posted by Kitt at 1:05 AM