Imitation is not just flattery

Every time I stop to watch bees on flowers, I run into something else new. While the bees have so far been concentrating on the salvias and the bachelor buttons (Centaurea cyanus), they are now showing an interest in the newly blooming lamb's ears (Stachys byzantina): 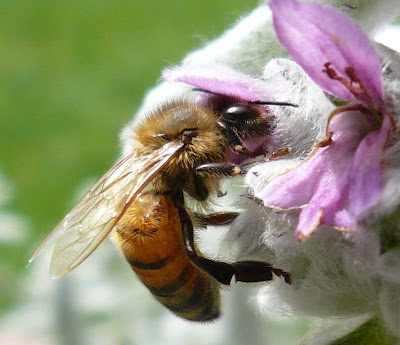 As I was zooming in on the bees, I heard a different kind of buzzing and caught this fellow (or gal) hovering about: 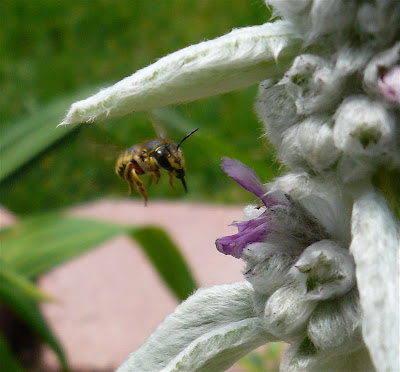 Hmm. Looks and acts bee-ish – hovering, buzzing, feeding on nectar – but isn't. But also not a yellowjacket or wasp.

(Edit: I originally posted that this was a member of the Syrphid family, known as a flower fly or hover fly. But I was wrong, as a commenter pointed out. It's really a wool carder bee, a solitary member of the bee family.) 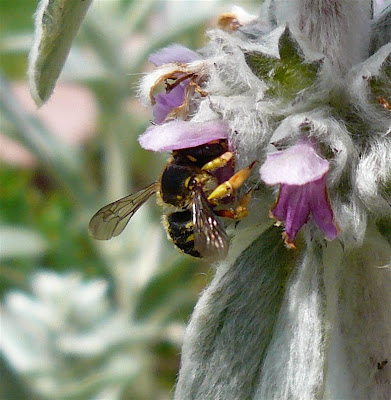 What was funny about this one, though, was that it had decided that the clump of lamb's ears was its exclusive territory. Every time a bee would come in for a taste, the fly would land on the bee and drive her off. That would happen too fast for me to get a photo, sorry!

But it didn't seem to mind me hovering around with my camera, and even set down for a portrait. 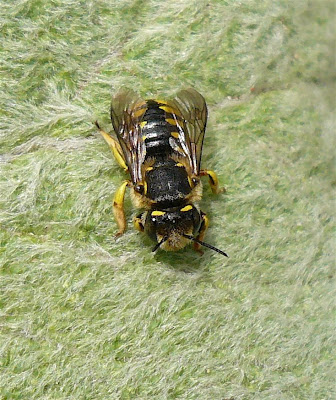 The lamb's ear makes for some very '70s upholstery, don't you think? And the bee looks to be wearing shades. Cool, man.
Posted by Kitt at 12:04 PM