When I moved into this house, one of my first improvements was the addition of a swamp cooler on the second floor, tied into the upstairs ductwork. 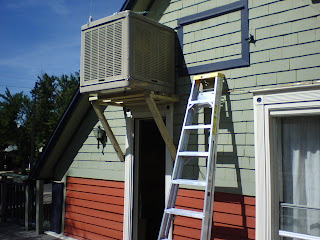 If you live in a dry climate, a swamp cooler (or evaporative cooler) is a great alternative to air conditioning; it cools the air by blowing it through wet pads, much like hanging a damp towel in front of a fan. It uses much less electricity than AC and you don't have to seal up the house.

It does mean I have to climb into the attic twice a year to turn it on or off and rearrange the ducts, but that's not arduous.

This spring brought a little surprise, though. 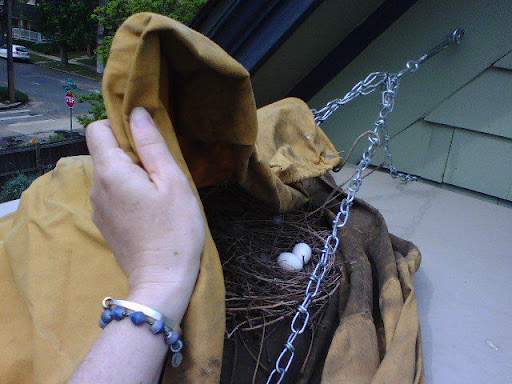 Remember those darned pigeons that were nesting under the deck? And then building over the front door? Well, they thought they'd finally found a viable alternative: a fold in the cooler cover. The wind had flipped it over because I didn't tie it securely enough last fall. 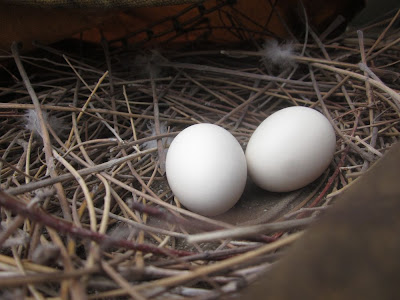 When I got up on the ladder and flipped the cover back, Whooosh! a pigeon came shooting out. "Whoa!" I shouted, scaring the Sergeant. I had to reassure him I was OK.

I'm sure the pigeons would've thought it poetic if I'd fallen off the ladder. 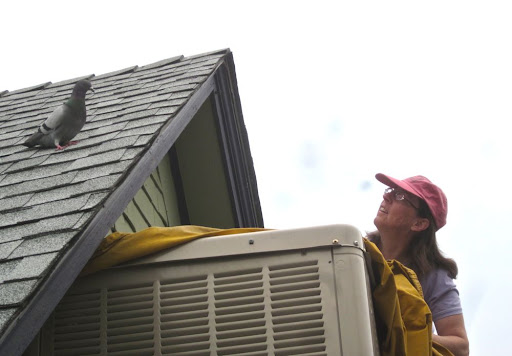 I felt sorry, but not enough to leave the nest. Did you know that pigeons produce up to five sets of babies a year? This pair will just have to try again somewhere else.
Posted by Kitt at 12:15 PM

Email ThisBlogThis!Share to TwitterShare to FacebookShare to Pinterest
Labels: pigeon