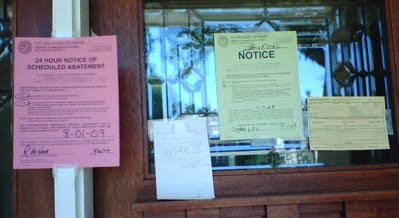 I took the picture above with my cellphone on Aug. 1 of the door plastered with warning noticed from the city to clean up the weeds and trash in the yard or face a $200 fine. There was also a note from an enterprising soul offering to do it for $20. Which I'm guessing didn't happen, since a city crew showed up the next day.

The For Sale sign is long gone, so I'm guessing the place is mired in foreclosure now. 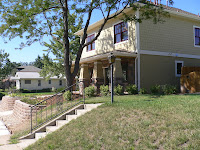 I would feel more sorry for the builders, who I think did a nice job with the design, if they hadn't been asking such a ludicrous price to begin with. Being way overpriced even before the market imploded means someone will now get it for a song, most likely, and all the subcontractors who worked on it will go begging.
Posted by Kitt at 10:19 PM

Email ThisBlogThis!Share to TwitterShare to FacebookShare to Pinterest
Labels: mansion