A co-worker out of the blue the other day emailed me and said, "I have a bee skep that my uncle made. Do you want it?"

You bet I did! 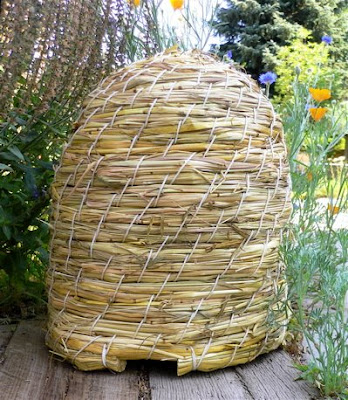 Uncle Ralph is about 92 and retired from farming, but not retired from living, that's for sure. He makes skeps using rye grass that he grows for that purpose and makes his own needles out of pail handles. He taught himself how to make skeps from a magazine. 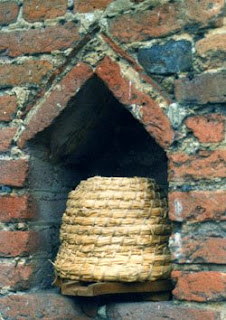 Now, if you don't know bees, you're wondering about this. What's a skep? A bee skep is an old-fashioned beehive that has since been replaced by the more practical (and humane) box hive you're used to.

In olden days, folks often would have special niches, called bee boles, built into their walls to hold bee skeps. The bees would build their honeycomb inside the skep. Before winter, half the hives would be destroyed to get the honey out, and the other half would be allowed to overwinter.

Uncle Ralph doesn't make his skeps as large as they would be if they were going to be used, but he makes them correctly, complete with a bee hook inside, from which the bees would hang their comb. 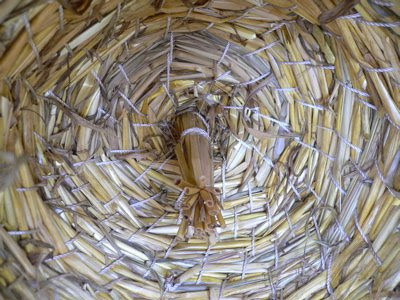 Skeps aren't legal for keeping bees anymore because they can't be easily inspected, and because harvesting means killing off the bee colony. I briefly toyed with the idea of getting bees to live in mine anyway and just not messing with them. But I think it will remain an ornament as it is intended to be.
Uncle Ralph sells his skeps for $25 apiece. If you're interested in getting one, let me know. I can't promise anything, but his niece is going to see if he wants to do mail orders.

Pretty neat! Given all my recent bee encounters, it couldn't be more apt for adorning my space.

(Update: Uncle Ralph told his niece he wasn't interested in making skeps for mail order. "Doesn't she know I'm old?" he reportedly said. Guess you skep-fanciers will have to learn to make your own. Sorry!)
Posted by Kitt at 2:04 AM