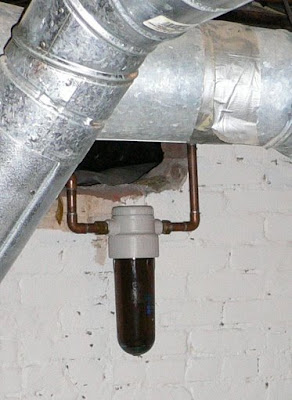 When I bought this house, the previous owners handed me a water filter cartridge and said, "If your water pressure gets low, you'll need to change the filter." I promptly forgot about that until recently, when the water pressure dropped so much that the sprinklers were failing to hit the middle of the lawn and showering was much less satisfying.

I marched down to the basement with filter in hand. And discovered I couldn't get the housing off. Thinking there might be some trick to it, I googled around and found that this model has been discontinued, and dismantling the thing requires brute force.

Now, why is the filter there in the first place? Denver's tap water is just fine, and even if it weren't, why filter every drop of water in the house? Baths, dishwasher, sprinkler system ... 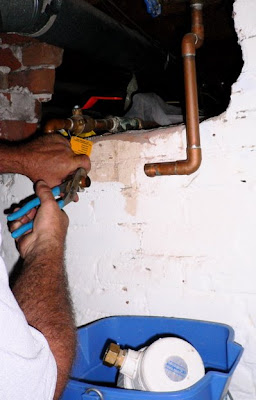 Rather than risk breaking the damn thing and being without water entirely, then paying through the nose for emergency repairs, I got Larry from Belmont Plumbing to come out today and remove it entirely.

It was a fairly simple matter for him to take it off and solder in a new pipe.

Once he was done, I ran upstairs and tried the shower. Wow! What a difference!

While he was here he fixed a leaky tap, too (it was barely dripping and I probably could have put in a new washer myself, but it didn't cost any more to have him do it. With plumbers you pay for an hour of labor no matter what.) 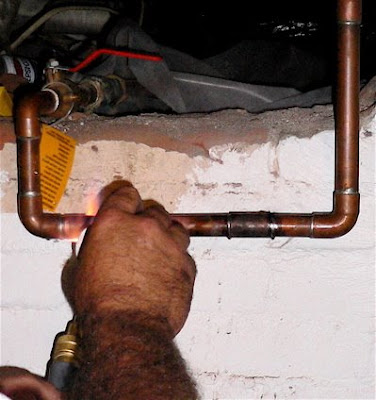 Sometimes it's a good thing to be under a lot of pressure.
Posted by Kitt at 10:34 AM