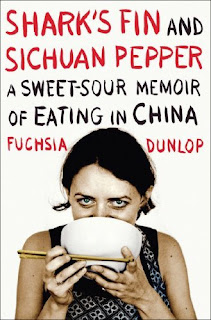 How lucky I am to read two excellent food memoirs in a row. "Amarcord" by Marcella Hazan was a very satisfying journey through her life, and you should definitely put it on your list when it comes out in October.

Tonight I finished yet another fascinating read, "Shark's Fin and Sichuan Pepper: A Sweet-Sour Memoir of Eating in China" by Fuchsia Dunlop.

Fuchsia first went to China in the early '90s (right about the time I left) on a grant to research Chinese minorities. But she soon found her interest straying to the marvelous food of Sichuan. She was studying in Chengdu, which was then a laid-back city of teahouses and hotpot restaurants. She and her friends, ex-pats and Chinese, would seek out good cheap food, and she would pay attention to how it was prepared, quizzing the cooks and exploring the markets.

Somehow she talked her way into a Chinese cooking school, which offered not only the challenges of rigorous courses but the barriers of language (everyone spoke the Sichuan dialect rather than the Mandarin she knew) and of culture (many of her classmates – mostly male – were baffled by her presence and less than friendly). But she persevered, and found a new career.

She went on to author a cookbook of Sichuan cuisine, and became a food writer for magazines and newspapers, exploring the many regional cooking styles of China.

This is a book I wish I could have read before I went to China, as it explains so many things I wondered about (like why everyone insisted on serving sea slug on special occasions, even though it's flavorless and has the consistency of a bicycle tire).

I think I would have appreciated some of the food a lot more, knowing the details she provides. Her writing really took me back, reminding me of many of the dishes I did enjoy. I would kill for a skewer of street mutton right now.

You don't have to be an old China hand to enjoy this book, though. Her adventures in travel and eating are well-told and entertaining, and she includes some recipes you can try for yourself.

As she notes, the Chinese word for population, renkou (人口) translates literally as "people mouths," and with 1.3 billion mouths, China has a lot of eating going on. You can sample some of it vicariously by reading this book.