I told a cow-orker I was going to a Bee Club meeting and she said, "That sounds like Glee Club, only dorkier." Well, yes, but we've already established that I've embraced my dorkiness in so many ways. And Bee Club was fun!

The subject was "swarm catching," and I took the night off work so I could go. And I learned a lot. Two gals from BackyardHive.com brought their swarm-catching gear and offered some pointers. Above, they're holding up a branch and showing the different variables you have to consider. 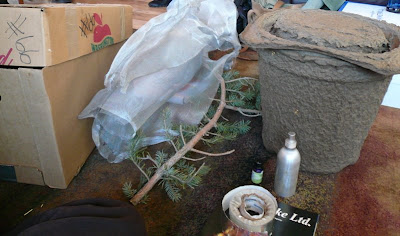 Here's a list of the gear you likely will want to have handy for swarm-catching:The flowerpot-like thing above is a swarm trap made of cellulose. I had seen them before priced at $40, but I just found them at Mann Lake for $13.50. So I think I will be ordering one or two. More later on why. 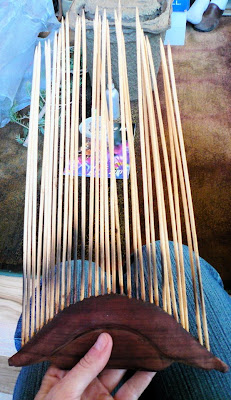 Then there was the most interesting piece of equipment – something I'd never seen before: a bee comb. It was invented by Corwin Bell of Backyard Hive as a gentler way of moving a clump of bees around, rather than thumping, bumping or brushing, all of which agitate them unnecessarily.

Reportedly he started by taping two afro-picks together, then hit on using barbecue skewers. You can make your own with a duct tape handle, or get all fancy as Corwin did with this carved handle. You can see below how the skewers are set into drilled holes and glued. You want the skewers spread out just a little, since you're picking up the bees, not skewering them. 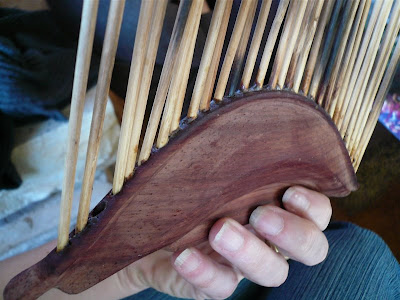 I've seen people use dustpans or pieces of cardboard to pick up a clump of bees, and someone at the meeting said she'd even used a frisbee as a bee scoop. But this comb sure looks a lot more elegant.

There was also a guy there who brought along some honeycomb and broodcomb from a cutout he'd done the day before. You could see all the different stages of bee development in it. 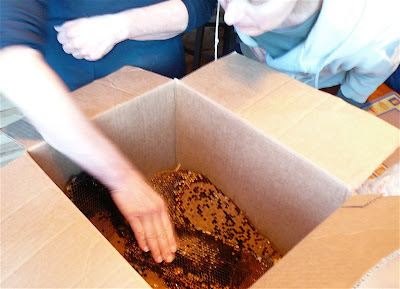 Cutouts are the removal of bees from inside the walls of a building. If you do get honeybees in your house, you need to cut open the walls and remove the bees and clean out all the comb. If you just poison the bees, you will still have all that honey in there, which will eventually seep through your walls and also attract all kinds of horrible pests, and possibly another bee colony. So you might as well get someone who is bee-friendly to do it.

Our host had a top-bar hive in his backyard, with a crazy roof on it. He was aiming for whimsy, but now he's rethinking it because it's too attractive to wasps, with that big empty space inside. 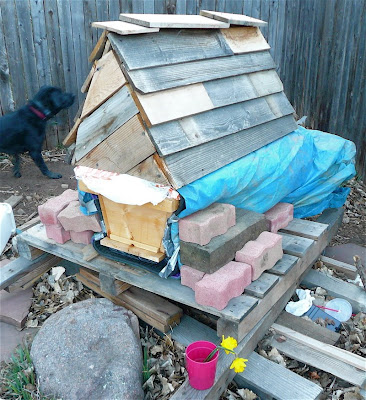 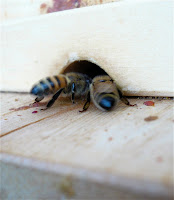 It was just after sunset and cooling down, so the bees were quiet, with just a couple coming out on the front stoop to look at us. Once the weather warms up more and there are things blooming, the entrance reducer will come off and the bees will have the whole open bottom strip for a door. Reducing the entrance helps prevent robbing, as the bees have less area to defend.

There, now you've learned a little, too! I'm on the swarm list now, so one of these days, maybe you'll get to see all these theories put into practice.
Posted by Kitt at 10:30 AM