Milk and eggs and baked ziti 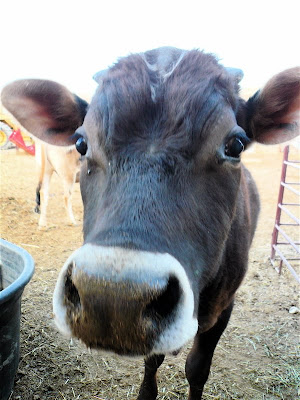 Dozer hasn't changed much in looks from the last time I saw him. He's got little horn nubbins coming in, but he's still cute. But watch out! He is a total bully now. Ever wonder about that word's origin? Go hang out with a young bull and you'll know. He very much wanted to push me around, even though I was outside the pen. So I wasn't able to get any closer than this to the new girl being milked: 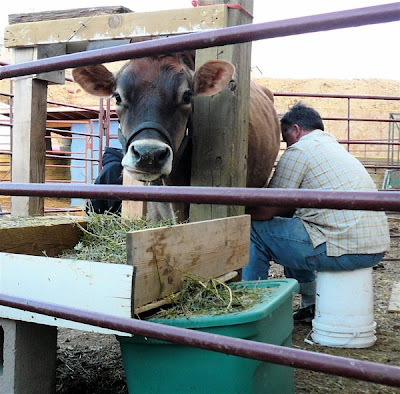 Her name is Minnie, and she's a Jersey like Daisy. It didn't look like Dozer was doing his duty by Daisy, who needs to produce a calf before she can produce milk, so Minnie joined the herd. Now, though, Daisy's looking a little ... round. So maybe? Anyway, there's milk.

And eggs. Those gangly chicks are now happy biddies. The hour was a little late, so no pics this time, sorry. But you can see their output. 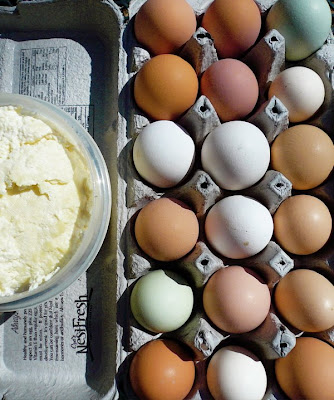 That stuff on the left? That's about two gallons of milk, turned into ricotta. 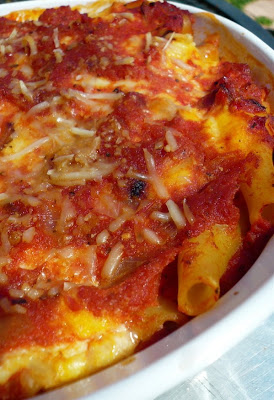 And the stuff on the right? That's baked ziti, made with the ricotta and tomatoes from last year's garden.

I've made ricotta before, with goat's milk. I followed the same method here, but the stuff refused to curdle! I used buttermilk as the curdling agent, but I suspect I didn't use enough. In desperation, I juiced two lemons and threw the juice into the pot. That seemed to do the trick, though the whey still looked more white than watery. But hey, I got cheese, and it tastes just fine.

For the ziti, I followed this recipe, very roughly. I used a gallon bag of tomatoes, thawed. I had seeded and cored them before I froze them, so I just had to spend a couple minutes pulling off the loose skins before running them through the food processor.

I sauteed half an onion and garlic, minced, added the tomatoes, a bunch of dried basil, salt and pepper. Meanwhile, I had the pasta boiling until nearly al dente, and separately mixed up a couple cups of ricotta with two beaten eggs and a handful of shredded mozzarella and shredded parmesan.

Toss the pasta with a little sauce, layer it in a casserole, add dollops of cheese mixture, then sauce, and repeat once or twice, depending on the size of the casserole. Bake at 375 for about a half-hour. (The recipe said 350 and 20 minutes, but I like mine really baked.)