Once more, with feelers

On Saturday, Tom the sprinkler guy arrived to get things running for the summer and said, "Oh, bees! I have a customer who's looking for some. And I might want to get some myself." I gave him my card and Jim called me later in the morning to say, yes, he was looking for a swarm.

A few hours later I got a call from a gal who had already had two swarms in her yard the day before (I sent someone else to get them) – a third swarm had shown up next door! I called Jim back and said, "You want bees? You got bees." 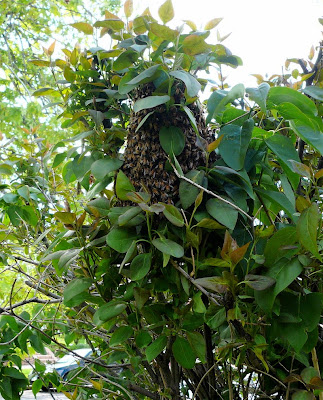 After a quick stop to get some supplies (Jim wasn't quite ready to get back in business), we found this very easy swarm in a lilac bush, only 6 feet off the ground. It was a simple matter for me to hold the the two main branches the bees were clustered on and for Jim to cut those branches. I just lowered the clump into the box, shook the bees off and put the lid on. 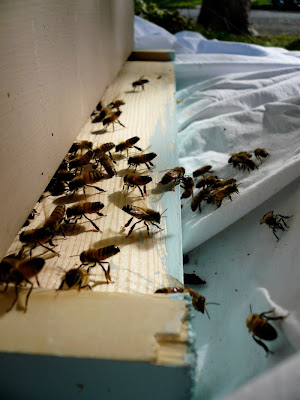 With the queen inside, the fanners came out on the front porch and let everyone know. After 20 minutes or so, nearly all the bees had gone into the box.

I'm bummed that I forgot to hit Record on the video camera I'd set up, so I've only got a little footage of the aftermath:

A bunch of neighbors were watching from way, way down the block. We persuaded them to come closer and everyone ooh'd and ah'd. I handed out more swarm cards. With lots of big, old hollow trees in that area, I suspect I'll be back there again.
Posted by Kitt at 11:07 AM