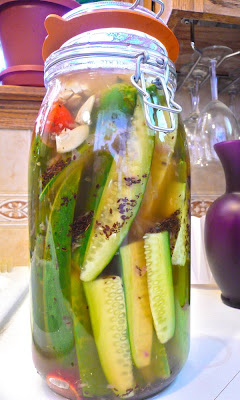 The first batch of hot spicy pickles I made were great, but not hot enough, the Sergeant said. The next batch even less so (I used cayennes instead of jalapeños).

So this time I packed six sliced peppers (cayenne, Thai and cherry peppers) in the bottom of a two-quart jar, topped with twelve sliced cukes and three whole Anaheims.

The jar is now ensconced in the back of the fridge with a note saying, "Do not open until Nov. 10."

They should be pretty darn hot by then.
Posted by Kitt at 12:07 AM