I was checking out this post at the blog French Laundry at Home, which involves poached quail eggs. I remembered I had a photo of me with quail eggs on a stick I bought on the street in China. The eggs were cooked in soy sauce and sprinkled with sesame seeds. I think this was in Changchun.

I'm not sharing the whole photo. I weighed about 100 pounds and had enormous glasses and a crewcut that was growing out badly. But the eggs look good! 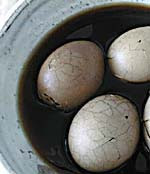 Chinese street food is really imaginative and usually delicious. Where I lived, there were vendors who would go up and down the halls, calling out their wares. One of my favorites was the tea-egg lady, who was aware of my devotion and would call softly through the keyhole "Cha dan! Cha dan!"

Tea eggs are boiled in tea and soy sauce, like the quail eggs. The egg is cracked a bit once it has firmed up so the saltiness seeps in. You get a tasty egg snack with no need to add salt.