The end of the rainbow: Pots de crème

Weeks ago I read Orangette's post about making butterscotch pots de creme. They sounded delicious, and so easy, she says, you can make them while on the phone. The recipe calls for dark muscovado sugar and demerera, which I picked up on my trip to the Berkeley Bowl. 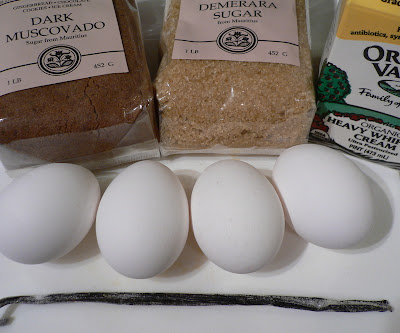 Certainly the ingredients are simple: Heavy cream (nearly a pint), sugar, egg yolks, a pinch of salt (not shown), and vanilla extract. Except I opted to use one of my many vanilla beans instead, and tossed a split half in with the cream while it cooked. 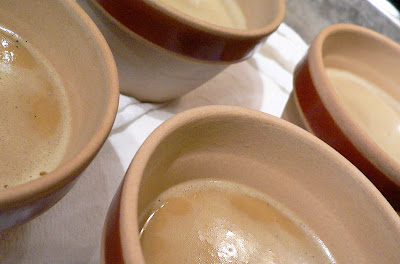 Simple, yes, but my goodness, you end up dirtying a lot of dishes for this. Two saucepans, a bowl, two measuring cups, a dish for the egg whites, measuring spoons, a sieve, spatulas and a whisk. Plus four ramekins and a pan to bake them in (which at least won't need to be washed).

I won't show you all the dirty dishes. Yes, you could make this while on the phone, but I don't recommend it for the first time. You heat the cream and muscovado in one pan. Cook water and demerera in another. Combine the two, then whisk the mixture into the egg yolks (make sure that phone has a headset!) in another bowl. Pour that mixture through a sieve. Skim the foam (except, I didn't). Pour into ramekins, set in a pan lined with a dish towel, put the pan in the oven and add hot water to it. Bake for 40 minutes or more until set. Chill.

(I'm chilling right now while they bake, having already licked out all the dirty dishes and put them in the dishwasher. This recipe certainly tastes good before being cooked.)

And here it is! 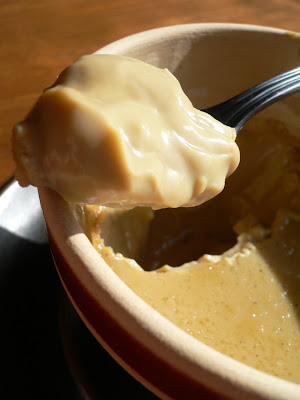 I ended up refrigerating it overnight (really shouldn't start cooking at 10 p.m.). Wow, it's tasty. And very very sweet. If you have a huge sweet tooth, you will love this. I think the flavor is terrific, but even this little serving is too much rich sweetness for me (it's solid whipping cream, after all).

I will stash this recipe away as a good dinner-party option to be made in demitasse cups (the oven temp is low enough that you can do that) to serve six or eight, rather than four. Served with espresso, I think it would be stellar.
Posted by Kitt at 10:42 AM