I have a huge number of cookbooks, and tons of Internet bookmarks for recipes I want to try. But when the mood strikes me to cook up something, it's often one of the most recent things I've seen that gets me rolling. A couple of days ago I saw this lazy day peanut noodle salad at 101 Cookbooks. Mmmmm, peanut sauce, I thought. Mmmmmmm, lazy.

On ski days, I'm all about lazy. 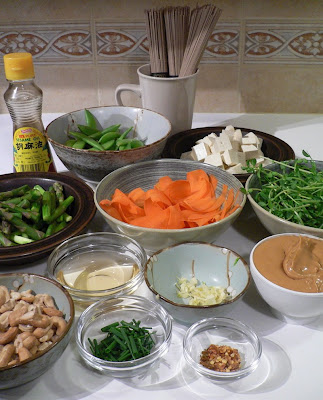 So, after a nice après-ski nap (which may top the damn-boots removal as the best part of skiing), I made a quick trip to the grocery and assembled the ingredients.

You can use whatever fresh vegetables strike your fancy. I opted for asparagus, carrots, pea shoots and sugar snap peas. Instead of spring onions, I used chives, which I like better (and have in the garden). 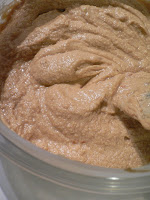 You also need an 8-ounce package of soba noodles. The recipe calls for extra-firm tofu, so I got some of that, too.

To make the sauce, combine 3/4 cup creamy peanut butter, 1/4 cup brown rice vinegar, a drizzle of seame oil, a pinch of red pepper flakes, some minced garlic, and salt to taste. Thin it with some hot water, adding a little at a time until it's more "saucy" than "gloppy." If you know what I mean.

The recipe suggests adding your asparagus in the last minute to the boiling soba noodles, then draining the whole thing and rinsing it with cold water to stop the cooking. This is an excellent suggestion: the asparagus came out at just the right tenderness.

I don't like a lot of raw garlic, and I wanted the thin carrot slices (created using a peeler) to be a little softer, so I sauteed them for about a minute in olive oil with most of the garlic. (I took that idea from the next recipe at 101 Cookbooks, for Sunburst Carrot Salad.)

I also like a little more flavor in my tofu, so I added more garlic and sauteed the tofu until it was a little crispy and golden around the edges.

Then everything got tossed together, including some crushed cashews (since I didn't have peanuts). Voilà! 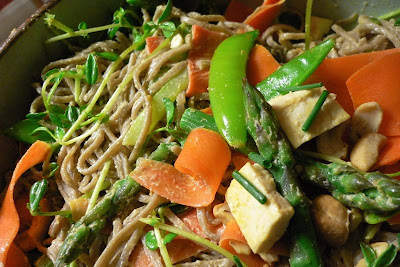 This was very tasty! I originally tried it with less sauce, but it needed more sauce and more salt, so I salted up the remaining sauce and mixed it in.

The tofu here was just eh. I think some marinated and grilled tofu, or some of the baked kind, would be better. You could also use a little grilled chicken.

Cilantro sprinkled on top would also be good, if you like cilantro. (I do.)

The main thing I will take away from this recipe is the quick and easy sauce – which I could now wing on the proportions and toss with any kind of pasta or vegetables – and the asparagus-cooking tip.

It wasn't so lazy the first time through (what with all the thinking I was doing, and being careful in my prep), but from now on it will be!
Posted by Kitt at 11:12 AM