Another day, another swarm capture

So today I got a call about a swarm right in the neighborhood. Can you spot the bees in this picture? 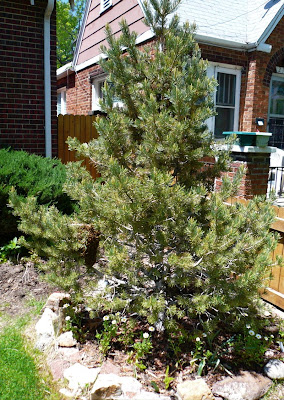 The homeowners got my number from the little garden center where I'd left my Got Bees? cards. They are avid gardeners and wanted to see the bees go to a good home instead of being sprayed with pesticide by a panicky neighbor. 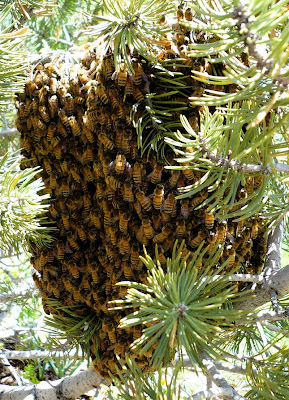 The bees have swarmed in this yard before, from a nearby bee tree. (A squirrel reportedly has been seen putting its paw in a hole up there to get dessert.)

My friend Deb came by to take pictures, so I hope to have some good ones to show you later. Meanwhile, I've got video again. If you watch it, you'll hear a lot of chitchat going on. I had quite the crowd watching.

So I put down a sheet under the tree, put the box under the branches, and gave them a good shake. Most of the bees went into the box. After a while, those that were flying realized the queen was in there and made their way into the box, too. I may have left behind a couple dozen, if that. 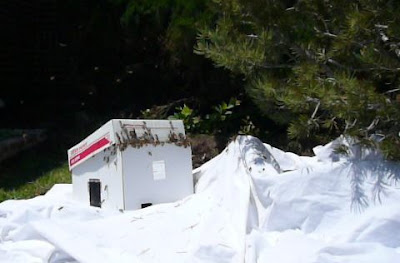 The box came home in my car, wrapped in sheets. Now it's sitting out there unwrappped, with a fan on it. I had to tape up the edges of the lid because bees were escaping that way. 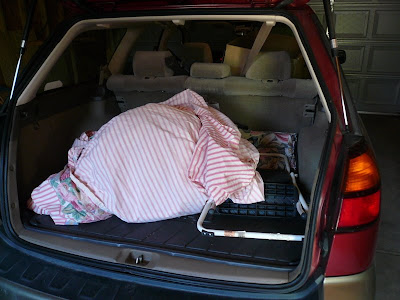 I'm just waiting for someone from the swarm list to call me and come get them!
Posted by Kitt at 6:40 PM