As I noted in my last post, I stayed up quite late getting the top bars for the beehive waxed. The wax gives the bees extra incentive to build their comb where you want it. In this case, that's right down the center of each bar, which can later be lifted out for inspection or harvest. 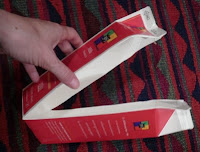 Rubbing the bars with wax is not as effective as dipping them in melted wax, so I needed to come up with a dipping system that would make the most efficient use of what little wax I have. You saw the shenanigans I went through to get it!

A waxed milk carton was the way to go. I sliced a quart container down the sides, folded it open and glued the ends and middle, securing everything with clamps to dry. Then I cut the middle flap and glued that back, too, so I had a long trough. 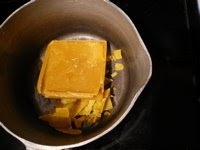 I melted half of my stock of wax in my dedicated wax-pot. (Obligatory warning: NEVER leave melting wax unattended! It's highly inflammable.)

The trough I suspended inside a cardboard box. Much easier than trying to cradle it on something, and you have the box to catch drips. If it's a warm day, you might consider doing this outside, to minimize risk of disaster. 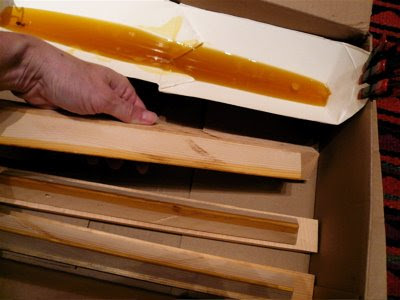 This worked out perfectly. I was able to wax most of the 36 bars in one go before the wax hardened up again. I peeled it out, remelted it and waxed the rest. And I was able to recover wax that was left over
Posted by Kitt at 11:05 AM