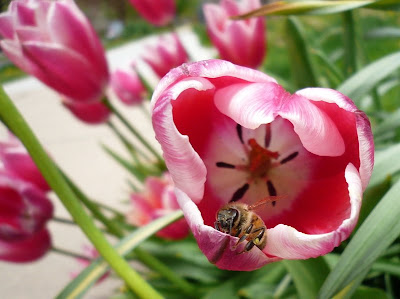 Oy. Yesterday a friend's hive swarmed while I was on the phone with her. But we were both on our way to work and had no time to capture them. They were gone by evening.

This afternoon I got a call from an elementary school about a swarm on the playground. I considered going after work, in the dark, to try to find them, but common sense won out and I called someone else to go get them. Just as well; the cluster had moved to a tree branch about 20 feet off the ground and it took three people maneuvering with a pickup and ladder to get them.

Still at work, late, I got another call: big swarm on the ground at such-and-so address. Could I go at 5 a.m. to scoop them up? Ordinarily I'd say yes, but I've got an early meeting.

And my weekend is going to be similarly booked up. The hive is ready to go, and I hung a pheromone lure in it tonight. Maybe the bees will come to me.
Posted by Kitt at 12:45 AM