I started hearing about tilt-shift photography not very long ago. It's probably been around for a while. 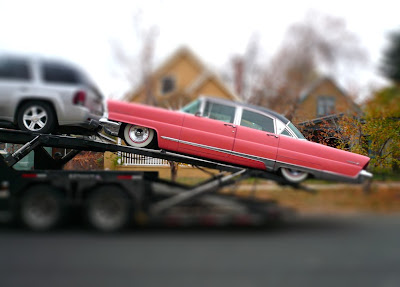 I was impressed by Karen's toy jeep and today found tiltshiftmaker.com (via Cool Tools), where I made my own crude examples from photos of cars in my neighborhood. That's a 1956 Lincoln Premiere above and a 1963 Chevy Biscayne below. 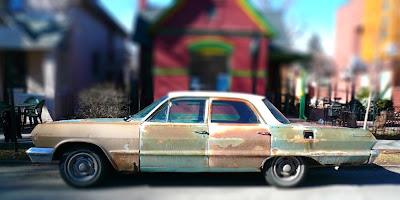 A very particular kind of photo lends itself to this treatment: preferably taken from above, with lots of foreground and background and small points of interest near the middle. The manipulation of focus is one part of fooling your brain into thinking you're looking at a miniature. The other part is using photos of things that could conceivably be miniatures, such as cars or boats or model railroad scenery.

I don't take a lot of such photos, as it turns out, but maybe I'll try snapping a few now with tilt-shift in mind.
Posted by Kitt at 8:42 PM

Email ThisBlogThis!Share to TwitterShare to FacebookShare to Pinterest
Labels: cars