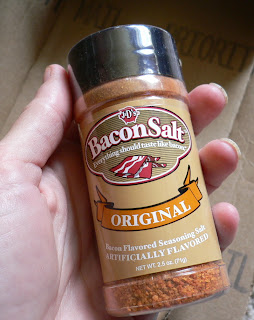 A package arrived today and it took me a second to remember, oh yeah! I ordered bacon salt! I saw a post a while back about it on Running With Tweezers, and kept thinking, mmm, that sounds like just the thing. I really shouldn't eat too much bacon: I went through a bacon-with-everything phase and my cholesterol level went kablooey. Since I've never ever had a cholesterol problem, and it doesn't run in the family, I had only bacon to blame. So I quit eating it all the time, and switched to nonfat lattes. Boom, cholesterol level dropped like a rock.

But I still love bacon, so I'm going to try this. Maybe on those Greek green beans instead of actual bacon!
Posted by Kitt at 11:29 AM