Spotted this fabulous streetside topiary in Alameda. It's next to the House of Winston.

Winston is a very special flat-coat retriever I met at the bagel shop one day when he came trotting in with a small plastic bag in his mouth. A few minutes later his owner walked in, took the bag from Winston, removed some cash from it to pay for his bagels and handed the bag back. "Winston likes to carry the money, but he tends to slobber," Winston's owner told me. Winston was about 10 years old at the time. 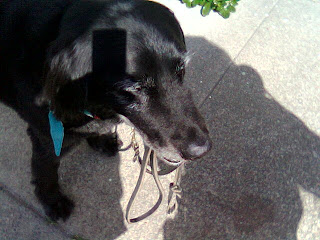 I spotted Winston a couple more times after that, and then not at all. I worried he had died. Then I got a picture of him sent to my cellphone by a friend who knew of my concern. "Look! He's alive!"

Turns out Winston had had to have surgery and took a year to recuperate. I haven't seen him in person yet, so I still worry about him – surgery is hard on an old dog. But I'm pretty sure this topiary is his owners' work. Maybe it's a tribute.
Posted by Kitt at 7:58 AM

Email ThisBlogThis!Share to TwitterShare to FacebookShare to Pinterest
Labels: dogs