It's 59 degrees and raining, so what am I doing? Making strawberry frozen yoghurt! You'd think I would have decided to get the frozen dessert bug earlier in the summer when it was in the 90s every friggin' day, but no.

Two things pushed me: the strawberry balsamic ice cream I had in San Francisco last week was so delectable, and then I happened to get a copy of David Lebovitz's "The Perfect Scoop." It's been praised twice by Sam over at Becks & Posh (here and here). No figs at Safeway, but some pretty good-looking strawberries, cheap. If you don't have "The Perfect Scoop," David Lebovitz has posted the recipe here.

(I'll check Whole Paycheck Foods later this week for figs -- a couple years ago I found some there at $1 for a whole basket on the verge of going bad. I ate them all quickly to save them from such a sad fate, and felt virtuous.) 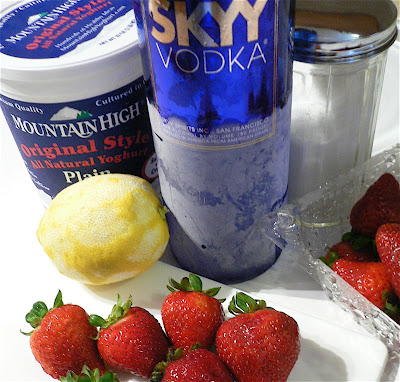 I was going to make ice cream, but the simplicity of the frozen yoghurt recipe appealed to me. Strawberries, sugar, yoghurt, lemon juice, and vodka or kirsch. The alcohol is optional, but a little splash of it helps keep the yoghurt from freezing too hard. I had no kirsch on hand, but vodka? Of course!
The recipe says to remove the stems and hull the strawberries. "Hull"? To me, that means "remove the skin or shell" (the hull), but I guessed that here it means "remove the hard white center part that doesn't taste like much." 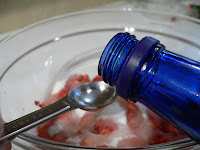 Trying to take this shot while balancing the camera on top of the yoghurt container (plus all the times I've had to brace the camera on something in low light for long exposures) has pushed me over the edge from "I should get a tripod" to "I'm going to the camera store today." I want a Gorillapod, so if the store doesn't have it, I'll order one from Amazon.
The strawberries macerate (are macerated?) for an hour on the counter and stirred occasionally. "Macerate" is a strange word; it feels like it should mean something active, like mashing, masticating or masturb ... er, something else. But it's just soaking/steeping. I should look up the etymology. Maybe later.

Then the strawberries go in the blender with the yoghurt and lemon juice. But I was thinking, OK, lemon's acidic, balsamic vinegar is acidic. Why not fig balsamic? So in that went. Into my classic Waring blender, bought for $5 at a rummage sale 20 years ago. Not bad!
I don't like strawberry seeds in my ice cream, so out came the chinois Mom brought back from France years ago. Thanks, Mom! I've now added one of those wooden pokey/mashy things to my mental wishlist of kitchen gadgets. In the meantime, a spatula works OK. Smoooooooth!

Then out came another gadget courtesy of Mom: the Donvier ice cream maker. Thanks, Mom! No salt, no ice, no electricity, no kidding. 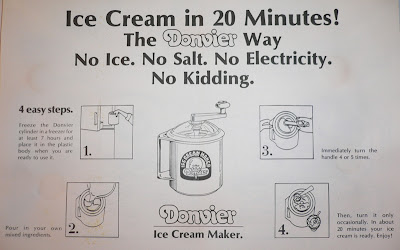 It really is magic. You pour your ice cream mix in, turn the paddle a few times, then again every few minutes. Voilà, frozen treat.

The result was delicious, at least the little taste I got. I had to quick pack it in tupperware and toss it in the freezer; as usual, I pushed food prep right up until I had to go to work, with no time to enjoy what I'd made. But that's OK; it's waiting for me when I get home.

P.S. But for the sake of completeness after the fact, I'll post it here, too. Turned out great! Had to use raspberries with mint leaves for garnish since I forgot to save out a strawberry. I think I would use a little more balsamic next time, too. I used a melon baller to scoop and served in a champagne glass. This is super-delicious! 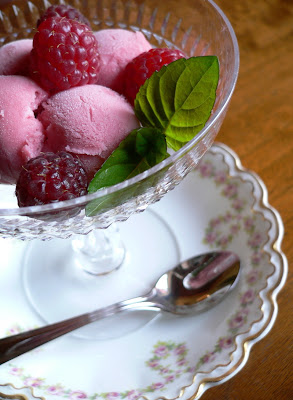