I'd hate to be a paparazzo 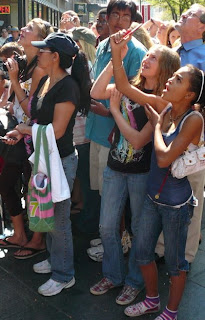 On Thursday morning as I was walking down 16th Street (a mile-long pedestrian mall through downtown), I found a crowd gathered outside Earl's restaurant. "Who's in there?" "Celebrities!" "Oprah!"

It was a Creative Coalition brunch to honor Annette Bening. I would have liked to have seen her or Susan Sarandon, or even Oprah, but I had missed the grand entrance of some and didn't stick around long enough to see others leave. (I heard Oprah was a no-show.)

But I got a handful of pictures of a few minor notables up on the balcony.
That's Anne Hathaway, Spike Lee and Josh Lucas. You can click on the pictures to see them a little bigger. 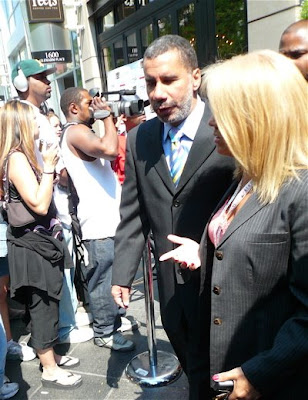 (Amusingly, the State of New York still has Paterson listed on its lieutenant governor home page. You may recall that Paterson replaced Eliot Spitzer recently after the latter was caught paying for prostitutes. When you're a crusader for fiscal propriety, it's maybe not so smart to call your bank and ask that your name be removed from certain transactions.) 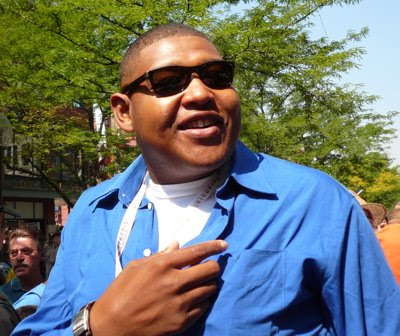 The crowd got really excited when it looked like Forrest Whitaker was coming out (me, too!) but then some consternation arose. "Wait, that's not Forrest Whitaker. Who is it?" It was actor Omar Benson Miller, who was in "8 Mile," "Shall We Dance?" and other assorted minor TV and film roles. He was congenial, anyway.

It was too hot and bright and crowded to stand in the sun for very long. I don't know how the paparazzi do it.
Posted by Kitt at 7:31 AM

Email ThisBlogThis!Share to TwitterShare to FacebookShare to Pinterest
Labels: DNC