A Gathering of a Few Like-Minded Friends 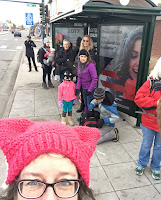 I didn't really know what to expect on Saturday, but I wanted to add my body in support of the cause. My friends and their 5-year-old son invited me to walk with them. They live just a few blocks away, so we decided to take the bus downtown together.

Officials at the city transit authority, RTD, had said they would add more buses along key routes. If by "more" they meant "one," then I guess they didn't lie. Two full buses passed us, and the driver of the second wasn't encouraging about any more coming along. We gave up and drove downtown instead. We found a spot in a parking lot without much difficulty.

(I stood on a bench to take that.)

Lots of pussyhats! This gal had a bag full of them that she was handing out. (My mother-in-law, by the way, made 26! She made hers out of fleece.)
The march had been going on for more than an hour before our part of the crowd even began moving in the direction of the march route. That's how many people there were. It took that long to funnel down into one street.

The signs were fun to see. There were so many great ones, and I could have spent a lot of time just trying to get good photos of them. But I didn't. I'm sure you've seen all of the best ones on Twitter, Facebook or Instagram, anyway. 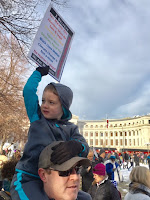 My friends' son was a very good sport about all the waiting we had to do, and then the shuffling and finally walking. Of course, he was able to do a lot of it on Dad's shoulders.

I wonder if he will remember the march when he's grown up. I hope he does!

One of the really impressive things about the march was how friendly and calm the whole thing was. There were lots of families with kids, disabled and older folk whom everyone was helping along, and no counter-protesters (that I could see, though later I did see some news photos of a few.)

The men's participation was heartening. Especially this call and response when we passed under the Denver Pavilions Skywalk:

It took us about an hour to walk the whole route, and there were still people just starting at the other end. The youngster was nearing the end of his ability to cope, and we were all a bit tired ourselves, so we headed back home. It was gratifying to read later about the stupendous turnout at similar marches around the world.
Posted by Kitt at 12:30 AM