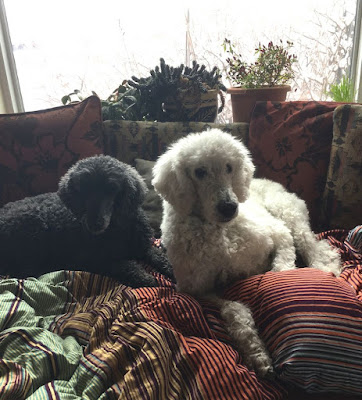 Jackson and Lucy are 11 and 13 years old now. They both used to be much more energetic and robust (me, too!), but now they spend most of the day sleeping, and our walks are slow and short.

Lucy has always been a bit of a willful princess, and picky about her food, but (knock on wood) she's always been reasonably healthy.

Jackson, however, has become our special-needs dog. A few years ago we discovered he has sebaceous adenitis, an autoimmune disorder that destroys the oil glands in the hair follicles and makes the hair fall out. Luckily I knew another poodle with the same problem and recognized the symptoms early on. 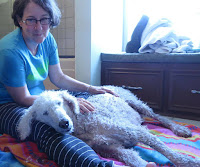 Conventional treatment involves regular oiling with mineral oil, baby oil or propylene glycol. Yuck. A soap-making friend suggested I try coconut oil instead, and gave me some to try. It worked! Jackson's hair grew back in the spots where it had fallen out, and his skin looked healthier.

So now he gets a regular coconut-oil massage every couple of months, or more often if he's having a flare-up.

I have a 50-pound bucket of oil from a soap-making supply company; this kind of oil is solid up to 76 degrees, so it's easy to handle. It takes about 2 pounds of oil and two hours to get Jackson all covered and allow for soak-in time. Dogs have a lot of surface area. Then I wash the excess oil off again with Dawn. (It takes grease out of your way!)

More disturbingly, and for unknown reasons, Jackson has also gone blind. His vision was always a bit poor (he could rarely catch a ball, for example), but one day we realized he was not seeing anything at all. He got tested for a bunch of possible causes (SARDS, Cushing's disease), but nothing quite matched. We're guessing it's something neurological. 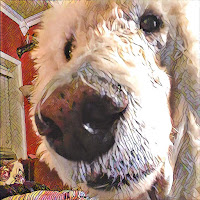 But we're not willing to have an MRI done to see if he has a brain tumor. I mean, what do you do with that knowledge, then? His only real symptom is the blindness, and his quality of life is still good.

He knows his way around the house and yard (except when it snows; that gets him a bit disoriented). And he still likes to go for walks (with a leash that has "BLIND DOG" embroidered on it). He loves to cuddle, he loves to meet people. He'll lean on someone he just met, if they pet him; he'll essentially fall asleep standing up. It's very endearing.

So we'll just keep loving on him, and steering him away from obstacles. He's so good-natured, he just takes it all in stride.