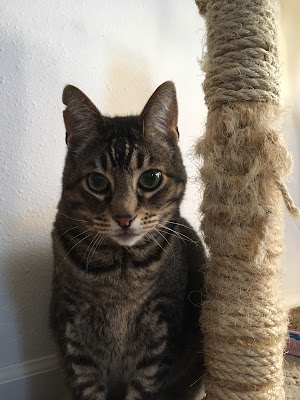 Enver used to weigh 23 pounds. Now he's down to about 18, thanks to a strict diet. His sister gets her food separately, in the top of the cat tower, which Enver is afraid to climb.

In the wee hours this morning he woke me up with his weird obsessive sheet-licking. Rasp, rasp, rasp.

I shoved a pillow at him and he promptly leapt off the bed and began sharpening his claws on the scratching pad. Crunch, crunch, crunch.

Then he walked around and mewed piteously. Mrr-owwww. Mrrrowwww!  Nosed around his food dish. Clink, clank, clunk.

Then he got into the litter box in the closet and started re-arranging the litter. Scritch, scratch, scritch.

Enver could very well be a children's picture book character in his next life. 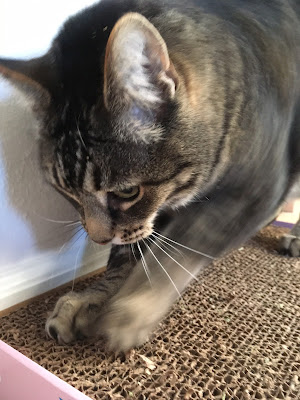 Email ThisBlogThis!Share to TwitterShare to FacebookShare to Pinterest
Labels: cats, Reba and Enver