Fennel has such a lovely mild flavor that even if you don't like licorice, you will probably still like fennel. I adore licorice, so I'm a pretty big fan of fennel, too. And who doesn't like potatoes? (I don't think I've ever met anyone who didn't. Have you?) 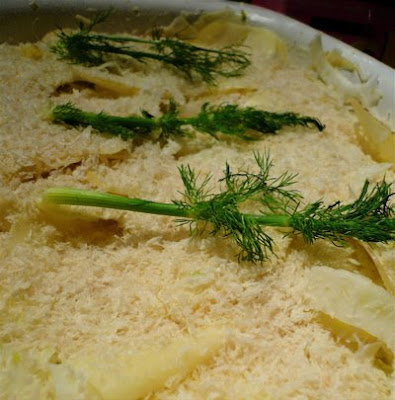 A gratin is pretty easy to assemble, even in the middle of the night.

Bring a mushed clove or two of garlic plus one bay leaf to boil in 1.5 cups of dairy (heavy cream, half-and-half or milk in any combination, but creamier is better) and a half-cup of chicken stock. Remove from heat and let steep as you prep the other ingredients. Preheat your oven to 375.

Thinly slice a handful of potatoes (I used Yukon golds) and a fennel bulb or two.

Remove the garlic cloves and bay leaf from the milk and mix the milk into the potatoes and fennel, along with a handful of grated parmesan, some salt and pepper, and a grating of nutmeg. Put it all in a buttered baking dish. Top with bread crumbs or more parmesan, or both. I used panko. Bake loosely covered for half an hour, and then uncovered for another 45 minutes to an hour. (Stick a knife into the potatoes to make sure they're completely soft.) If the top isn't brown enough for your liking, you can turn on the broiler for a minute.