The bees have been in this hive for just over four months. Starting from scratch, they've manage to build out 23 bars of comb. 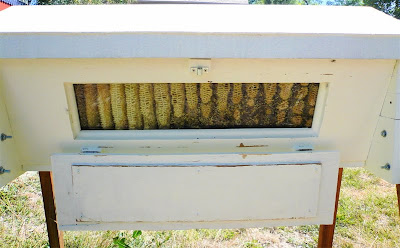 Initially, the combs were free-hanging from the wedged top bars, but the bees have gradually attached the sides for greater stability. They leave space underneath and some holes along the sides for traffic. 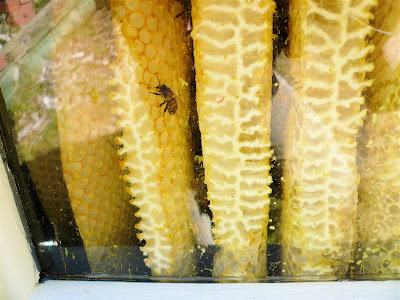 On Labor Day weekend I took a look inside to see if I might be able to harvest a bar or two of honey. The Sergeant insisted I get fully geared up in case the bees got ticked off. I did notice that as I worked further into the hive, the tone of their humming rose and got louder, but for the most part they stayed mellow. It helps that with a top-bar hive you're only opening a small area at a time, farthest from the brood nest. 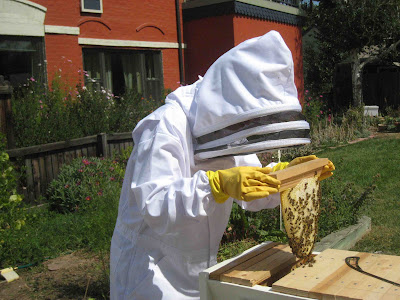 But I discovered that the last three bars were only beginning to be built out. Since I really want these bees to make it through the winter on their own, I decided to leave them all their honey. If there's any left in the spring, I'll take it then. They'll be happy to have the honey surplus gone so they have more room to raise babies and really ramp up honey production for me.

We've had a few really cold days, and the nights are chilly, so when the weather is fine they're working like crazy. They really could use some air traffic control at the entrance. 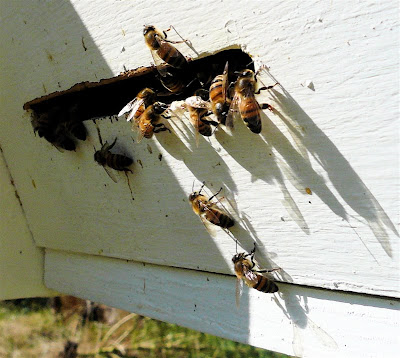 Now, in an ordinary box hive, which has a much longer entrance (usually the entire width of the box), bees that are adapted to colder climes will start sealing up the entry with propolis, leaving just a few bee-sized gaps. 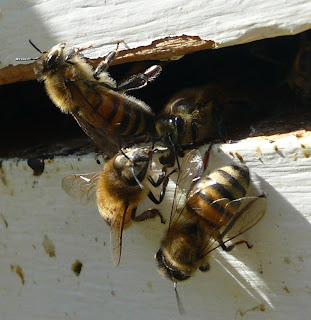 This helps insulate the hive and makes the entrance more defensible against hungry pests.

Some bees fail to do so, necessitating an artificial entrance reducer (a strip of wood) that the beekeeper installs.

But this entrance is pretty small to begin with, and the wood is nearly 2 inches thick, so these bees may not feel the need to seal up the gap any more. I'll check it later this fall with a flashlight at night to see if they are.

I took some video of the traffic, then slowed it down. My point-and-shoot camera doesn't produce enough frames per second for high-quality slo-mo, but you get the idea:

While I was shooting, a certain nosy poodle came up to investigate, and learned the hard way that bees and dog noses don't mix. I pulled this stinger out of his upper lip: 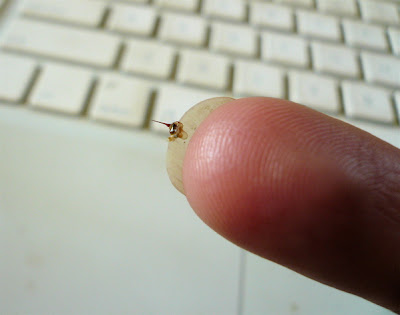 It may be tiny, but it packs a punch! Happily, he was none the worse for it. Just wiser.
Posted by Kitt at 10:45 AM 9 comments 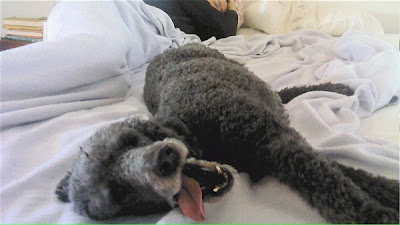 One of the things I've learned how to cook is chivda, a spicy snack that I call Indian crack. My friend Manisha brought it to a stitch 'n' bitch and I was immediately hooked. A bunch of us went out for Indian food and shopped at Bombay Bazaar, where I got the ingredients to make chivda myself. 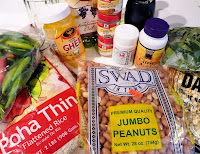 If you have an Indian grocery nearby, you can stock up on all the dry goods for multiple batches. The only fresh ingredients you need are Thai chiles and curry leaves (kadipatta). The latter are in high demand, so you may need to call ahead to make sure they're in stock. (I might try to track down a curry plant to keep in a pot.) 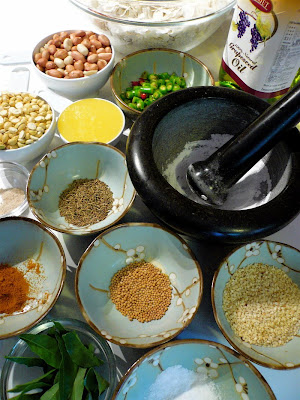 The most time-consuming aspect of this recipe is assembling the mise en place. You want to have everything lined up and ready to go into the hot oil, because once you start the process, you need to keep swirling or stirring the pan.

Because Manisha already posted the recipe, consider this post an adjunct with newbie notes. Click here for Manisha's recipe.

A couple of things I learned: A deep, non-stick pan works very well for this recipe.

If you have a mortar and pestle, you can use it to grind the salt and citric acid crystals to a fine powder, as well as the sugar. I saw this suggested in another version of this recipe. Maybe it's not necessary, but it helps me justify my mortar-and-pestle purchase.

When you are cooking the chiles and curry leaves, you don't need to wait more than a minute before adding the rest of the ingredients. I thought the chiles needed to be crispier, but they do continue to cook, so I ended up with them just this side of burned the first time I made this.

When you add the poha at the end, toss it gently, just turning it over and over with a spatula to coat it. If you stir vigorously, you'll break up the flakes and the curry leaves too much.

One batch is a lot! I took my first batch to work and it lasted a few days. The people who liked it really liked it. The people who didn't, well, I didn't hear from them. 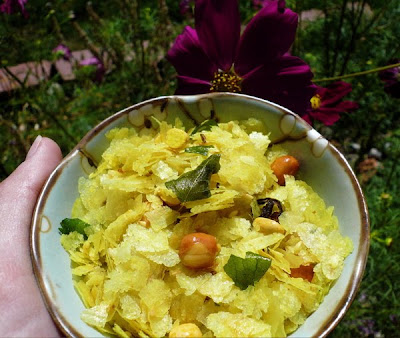 The next time I need to make a snack for a party, I'm taking chivda.
Posted by Kitt at 2:38 PM 13 comments