Jackson is a good sport when it comes to modeling knitwear. I knit this last weekend with one skein of Tahki Yarns' Boulder, a super-chunky wool and nylon mix. I knit it flat with a provisional cast-on, then grafted the ends together. 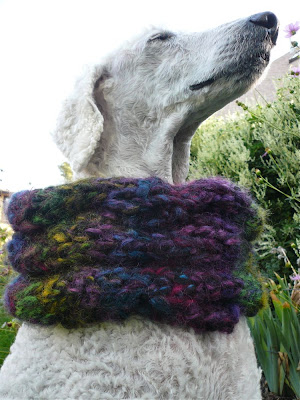 I was nominally following a pattern that would result in a woven-cable appearance, but I wasn't paying close attention and ended up with waves instead. That's OK. If you want the pattern, it's quite easy. Knits up in a couple of hours on size 19 needles. (You can use even larger ones, but that was the largest I had.) 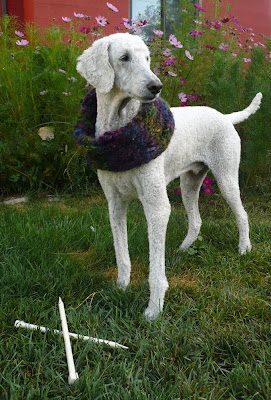 I might try making another, but I'll do it as a buttoned cowl instead so it will be more snug. I like a cozy neck when it's chilly outside.
Posted by Kitt at 9:04 PM 2 comments

Email ThisBlogThis!Share to TwitterShare to FacebookShare to Pinterest
Labels: knitting, Lucy and Jackson


I had this pretty yarn in my stash. I decided to knit up a swatch for a hat I want to make.

When you swatch, you should wash the swatch in the same manner as you would the garment. In this case, I followed the label's instructions to use cool water. I added a little Wool Wash.
Ummmm.

"Is the water supposed to look like that?" asks Lucy.

"I know!" says Jackson. "Let's fill the Sergeant's Unobtainium bottle with it!" (In fact, the Sergeant was planning to fill the jar with water and green food coloring.)

And the swatch finally rinsed mostly clear and dried out still looking pretty, if a little less brilliant and blue-green than before.
Posted by Kitt at 11:00 PM 0 comments