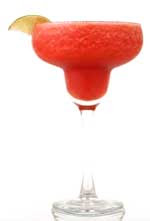 I have not been a big fan of Mexican food – that is to say, the kind of Mexican food I grew up eating in Midwestern restaurants – the gringo-friendly (i.e. bland) platter of refried beans, rice, meat, cheese and sauce in combination with some incarnation of a flour tortilla. But the strawberry margaritas made it OK.

Then we went to Mexico for our friends' wedding and discovered tacos al pastor. What a revelation! We first had the tacos on the street and we were trying to figure out what that white thing was on top of the spit. Lard? No, pineapple! Plus a couple of onions.
Marinated meat is stacked on a spit that rotates in front of a flame, just like Middle Eastern shwarma, its inspiration. Except this is pork, not lamb. As tacos are ordered, the server shaves off the crispy grilled bits and some pineapple, too. 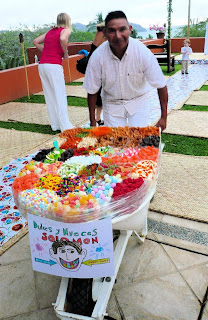 Put it on a warm tortilla with onion, cilantro and a squeeze of lime and it's heavenly.

To our delight, the same taco guys were at our friends' wedding! All their favorite street vendors catered the dinner, from the barbecued chicken lady to the pastry vendors and churro-makers, right down to the guy from the beach with the wheelbarrow full of candy.

Here's the guys from Tacos Ivan at the wedding. They did a booming business and probably disappointed a lot of folks looking for them on the street. 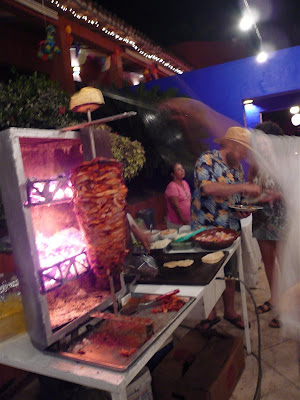 Back in Denver, I didn't think about tacos al pastor for a while (our own wedding plans consumed my thoughts), but then I had some good ones at the newly opened Pica's in Boulder and also stumbled across a blog somewhat devoted to local tacos al pastor: Denver on a Spit.

Last week, the Sergeant and I went to check out the (so far) top-ranked tacos, at El Taco Veloz, 5145 Federal Boulevard. It's on the west side of the street, right outside Regis University. 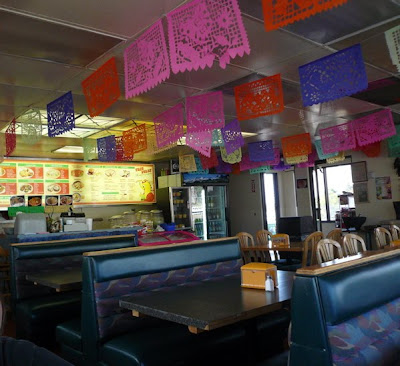 We went in the middle of the afternoon, so there weren't many people there. But the counter guy was quite friendly and the service speedy. 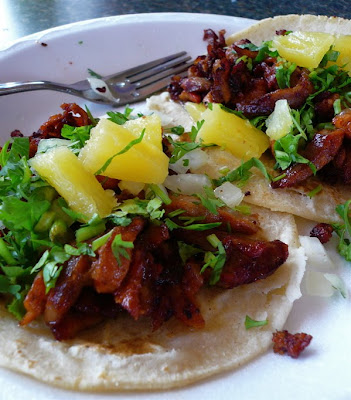 If only it weren't so far away! I am now trying to find good south-side tacos. I think I'll meander over to Tacos Y Salsas at 910 South Federal and give that a try today.
Posted by Kitt at 1:33 PM 5 comments 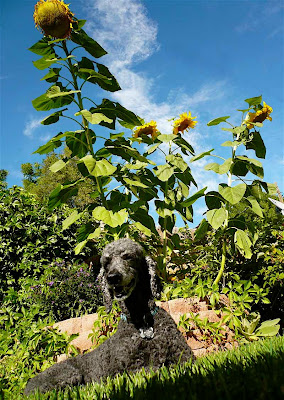 Lucy would like you to admire the ginormous sunflowers that the Sergeant planted. They are about 8 feet tall! He started them from seeds in mid-June. The bees love the blooms, aphids like the sap, and wasps like the aphids, so these are good flowers to encourage pollinators.

Unfortunately, too much encouraging of some pollinators leads to this: 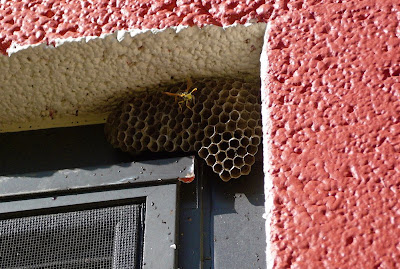 I was wondering why I kept seeing wasps hovering outside the laundry room window. They can probably stay there, since they're out of the way. The first good freeze will kill the nest, and we'll knock it down this winter.
Posted by Kitt at 6:35 PM 1 comments 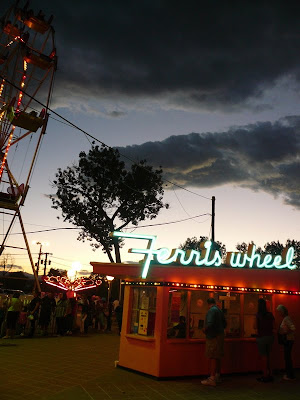 We went to Lakeside Amusement Park with friends a couple of weeks ago. I'd never been, and I was sorry I hadn't, once I saw the place. It opened in 1908 and many of the rides are quite old. The signage is awesome; very art deco. 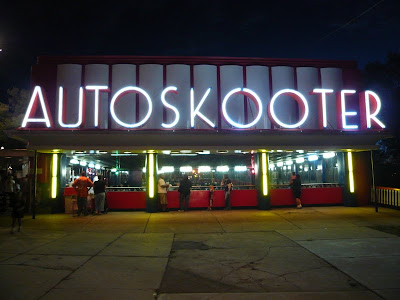 Admission was $2.50 per person, and most rides cost between 20 cents and 60 cents (I think that was a special rate). 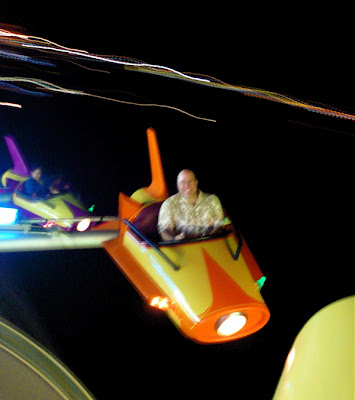 The spaceship ride cost 30 cents. It was a lot of fun! You could raise and lower your rocket as it spun around pretty fast and high in the air.

Less fun was the famous Cyclone roller coaster. Allegedly there have been no fatalities on this rickety wooden coaster since it opened in the '40s. I have to wonder. 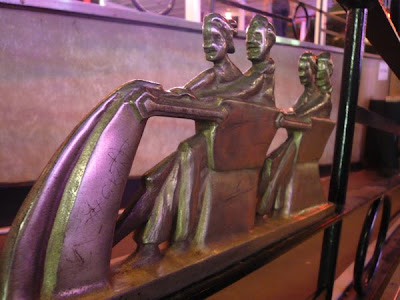 Seriously, I was terrified. There is one lap belt that we shared, and while I buckled it tight, I still came off the ride with leg cramps from bracing myself against the sides of the car, afraid of being thrown out. That felt like a real possibility! 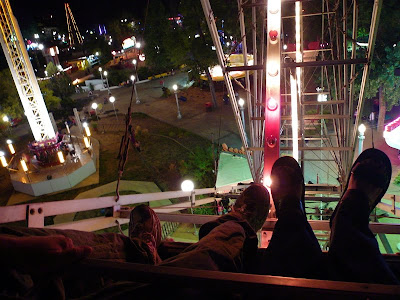 But we had great fun on the bumper cars, on the train, in the labyrinth and on the Ferris wheel (with a crazed operator who wouldn't let us off!). We'll definitely go back next year. I'll get some more photos then.
Posted by Kitt at 12:14 AM 2 comments

With encouragement, Jackson and Lucy are getting more comfortable with getting wet.

Jackson is much more inclined to go in, and his desire to get the ball is a great motivator. 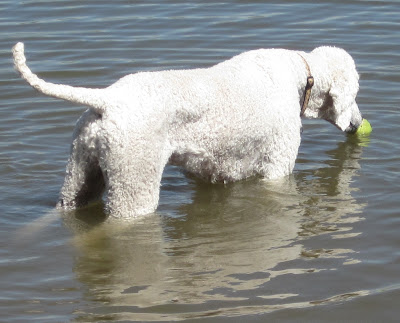 He doesn't like to stick his nose in the water, which makes it hard to grab the ball. He manages by grabbing the ball with his head sideways.
Today he got out far enough to start floating off his feet a little. He did not like that. When I threw the ball still farther out, that was the end of the exercise.

Lucy, meanwhile, will only go in if I do, too. So she didn't go in today. 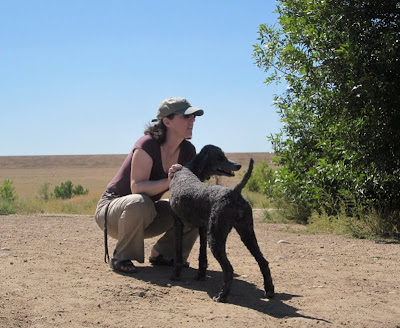 It's not the heat 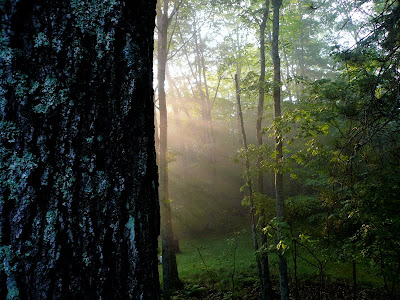 Whenever I leave Colorado, the first thing I notice when I arrive elsewhere is the humidity. My skin relaxes and my hair curls up. It's weird! You have to worry about mildew. Towels take longer than an hour to dry.

When I saw the haze in these Wisconsin trees, I worried there was a forest fire. Ah, no, it was just fog.
Posted by Kitt at 4:55 AM 1 comments 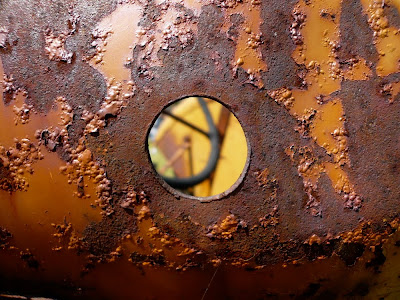 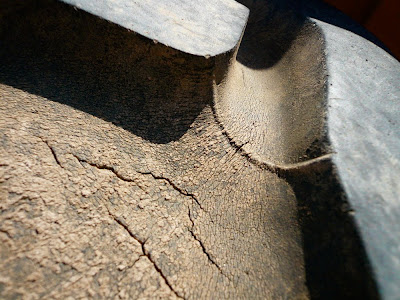 Here's something I saw in Wisconsin a couple of weeks ago. The two photos together constitute a pretty good hint, I think. Can you guess what it is? Click on either photo to see if you're right!

(As always, no spoilers in the comments, please.)

Email ThisBlogThis!Share to TwitterShare to FacebookShare to Pinterest
Labels: What is it?, Wisconsin

I have the bad habit of snacking while I work. If paper were edible, I'd have the cleanest desk in town.

But while snacking helps me concentrate, it doesn't help my waistline. There are always sweets beckoning from the office trough, so I've started bringing in popcorn as an alternative. Popcorn is not calorie-free, but made at home with a light oil it is healthier and lasts a lot longer than a handful of Oreo cookies. 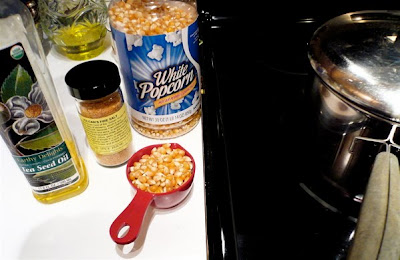 Making popcorn on the stovetop is simple, fast and cheap. You just need oil, popcorn and seasoning. I've been using tea seed oil that Jen gave me. It's very light and has a high smoking point. But any vegetable oil will do. Just a splash – about a tablespoon. Heat the oil in a covered pan over medium heat with a couple of kernels. When the kernels pop, add 1/3 cup kernels, shake the pan and wait for the popping to begin. As the corn pops, shake the pan once in a while so it doesn't stick. When the popping slows, take the pan off the heat, let it sit for a few more seconds, then pour the popcorn into a bowl. 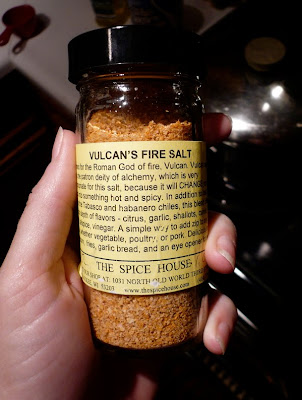 I have been seasoning my popcorn with Vulcan's Fire Salt from The Spice House in Milwaukee. It's a mix of salt, Louisiana chile mash, garlic, habanero chile, shallots, Tellicherry pepper, lime peel, pimenton de La Vera, picane, cumin, allspice and vinegar. Boy, is it yummy! Leaves your tongue a little numb. 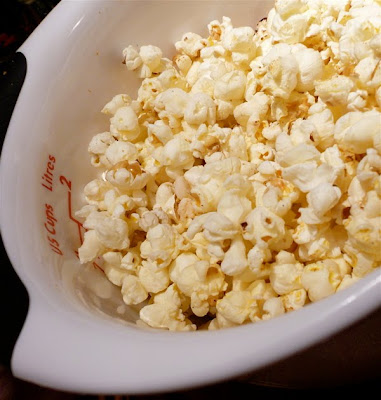 I just ordered a pound of the stuff to refill my shaker. That should last me for a few months of snacking. Give it a try!
Posted by Kitt at 10:55 AM 4 comments 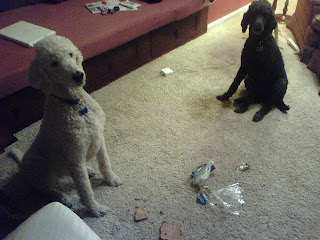 Bread should be left in the bread box, not on top of it.
Posted by Kitt at 10:55 PM 3 comments

A friend emailed me to ask if I could remove a beehive from her parents' neighbor's yard. I gave the nice little old lady a call.

"Are you sure they're bees?"
"Oh yes! They're building honeycomb on the side of the charcoal grill!"
"Was the grill covered before?"
"Why, yes, it was! I took the cover off last week, but I didn't notice them then. Can you come save them?"

I figured it was a recent swarm. I tracked down a guy who needed bees, then went to scope out the hive, just to make sure. I had my suspicions. 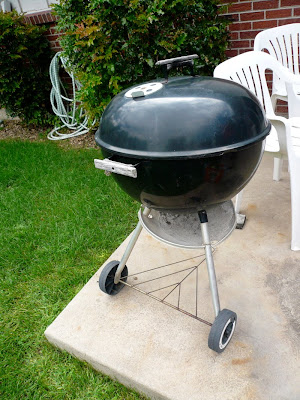 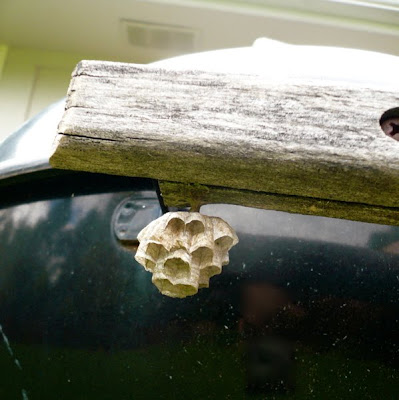 At least her heart was in the right place.
Posted by Kitt at 9:56 PM 2 comments