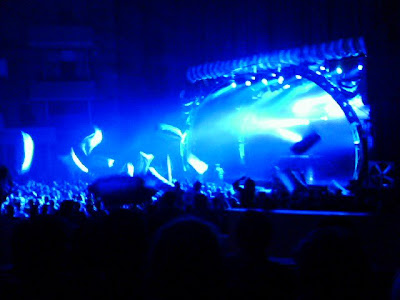 I was given a couple of tickets to The Aluminum Show. It's an Israeli dance troupe that does all kinds of crazy stuff with flexible ducts and streamers and inflated metallic balloons. Very athletic, very loud and flashy (literally – the strobe lights were a little intense at times) and quite fun.

The audience participation segments were entertaining and wild. I snuck a photo of the giant pillows that were flung out to be bounced around.

There were lots of kids there, and it seemed like they were having a blast. The Aluminum Show is touring all over the place, so you should try to see them if you can. Get seats in the orchestra section if you want full-on participation. I would pay for that, now that I know.
Posted by Kitt at 1:21 PM 0 comments 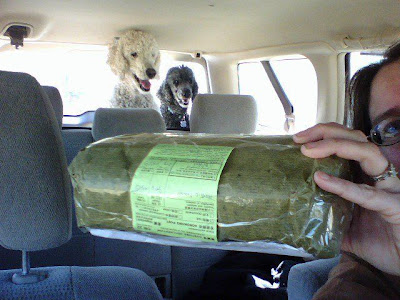 We recently got a package from Japan that I had to pick up at the post office. The pups went along for the ride. What could it possibly be? 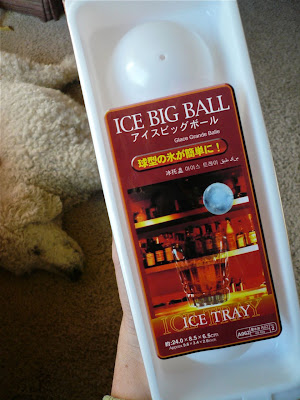 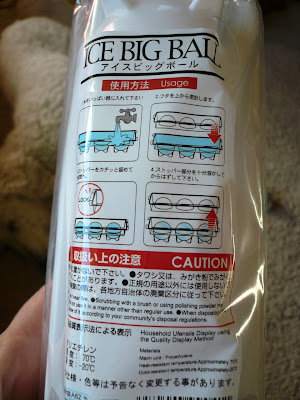 A little something for the bar! You may recall the Japanese ice ball maker we encountered in our cocktails class. We liked the concept, but not the price: $1,000 to make ice? How about $7, thanks to eBay?

The ice ball mold isn't nearly as cool, but it won't break the bank, and we can have fun playing with it.
After six hours or so, you have three ice balls just the right size to enjoy with your single malt or Old Fashioned. Because you've got the maximum volume of ice with the least amount of surface area, you get maximum cooling with minimal dilution. 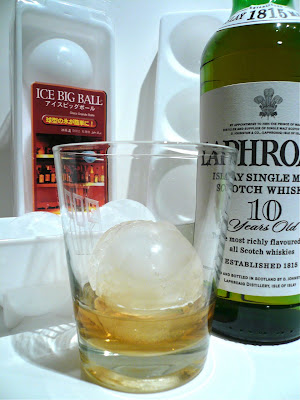 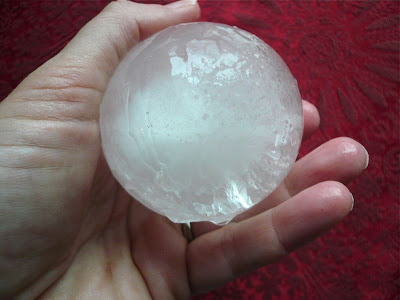 Looks almost as good as one from a copper mold, with enough money left over to buy a bottle of whiskey or twenty. I understand that distilled water will yield a clearer ice, so maybe I'll splurge on a jug of that, too! 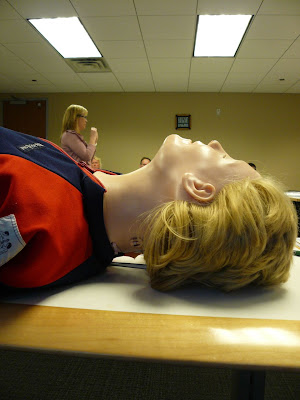 We had CPR training at work today. It's been almost three years since the last time.

Resuscitation Annie's looking a little worse for the wear these days. Oh, the stories she could tell! She was outnumbered in the class by smaller, modern and hairless dummies. They're kind of boring.

It's good to brush up and get the latest recommendations on technique. Now you're supposed to start right in on compressions, and then do rescue breathing. The compressions are faster, too – 100 compressions per minute. You can hum The Bee Gees' "Stayin' Alive" to stay on track.

Have you ever had to do CPR? I haven't, and I hope I never have to. There was this one time I found a driver slumped over his steering wheel, in traffic, in a snowstorm, and I thought, "Oh shit." But it turned out he was just drunk.
Posted by Kitt at 1:09 PM 3 comments 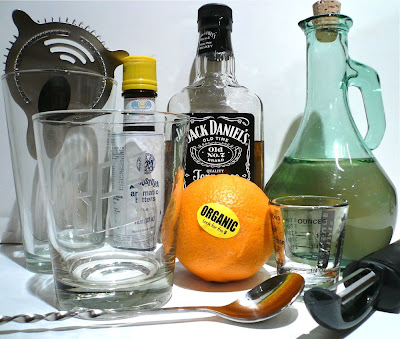 One of the drinks we learned to make in our Cocktails 101 class was the Old Fashioned. Rittenhouse Rye was the suggested spirit, but you can use any whiskey you like the taste of. Jack Daniels works fine. Southern Comfort has also been suggested.

Here's what you need:In a tall glass full of ice, add the whiskey and simple syrup:
Then carefully add three dashes of bitters and stir.As for stirring, you don't need to agitate the ice much, just spin the whole mass around in the glass a few times. This will cool down and blend the liquid. Then strain it into an Old Fashioned glass with fresh ice. Since you've already chilled your alcohol, the ice will be slower to melt and your drink will not get diluted as fast. 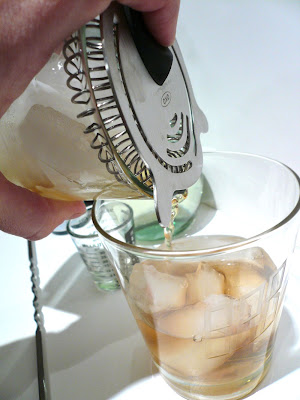 Now you're almost done! Just that last special touch:Slice off a strip of orange zest and give it a snap over your drink to release the oils, then drop it in.

Et voilà! A drink that could cost you $10 in a fancy bar (yes, I've paid that much) for mere pennies. 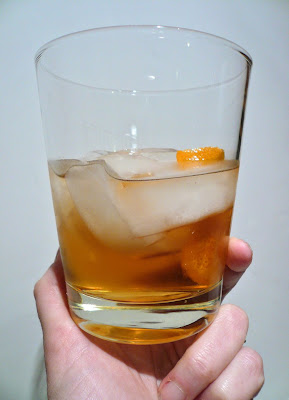 Not that I plan to stop drinking in fancy bars, but it's nice to have the option of staying in to enjoy a fine cocktail (and no one has to be the designated driver). Great for parties, too!

Breakfast on the Edge 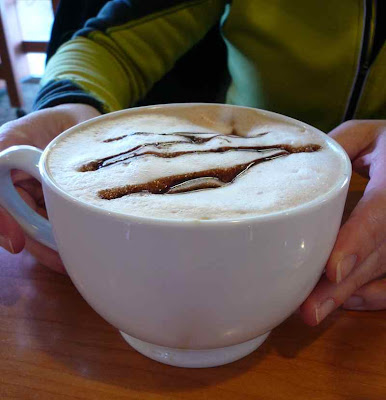 If you live in Denver, like to walk and enjoy a good breakfast, you can't go wrong with a brisk walk around Sloan's Lake first thing in the morning, followed by Breakfast on the Edge. If, like me, you consider 11 a.m. to be "first thing," you can still get a decadent cup of joe and breakfast (or lunch!).

Or what the hell, how about a cocktail: 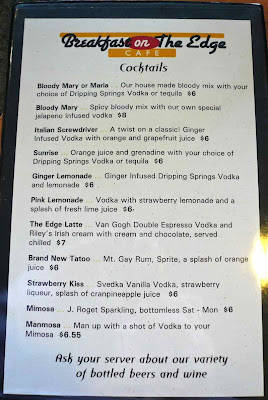 They're still working out the kinks (my regular cup of coffee took ages to arrive and there were some billing mistakes), but we were not in a hurry and the space is pleasant.My companions had the chop chop salad, a patty melt and a turkey sandwich. All right, some kinks remain to be worked out on the food, too: The salad was deemed OK, but "mostly lettuce," the hamburger was closer to medium-well than medium-rare, and the bread was not the greatest.

But I was quite pleased with my corned beef hash with eggs (I chose poached) and pancakes (instead of toast). 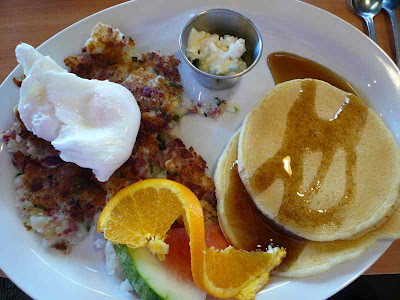 I do like hash, and this was good hash. Once the coffee arrived, it was good, too, and regularly refilled.

Overall it was a positive experience, so we're all willing to give the exercise another go the next time a fine free day comes our way.

No rest for the weary 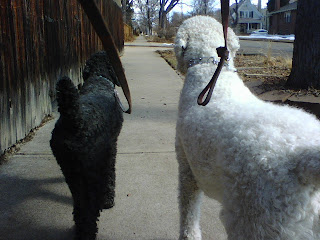 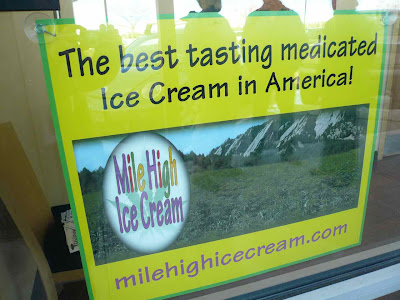 The proliferation of dispensaries and pot-laden products in Denver is mind-boggling. So to speak. In some areas there's a dispensary on every block. The Sergeant even saw a sign spinner on a corner lackadaisically twirling a leaf-shaped ad for one. Really.
Posted by Kitt at 12:04 AM 0 comments 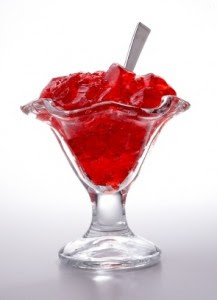 Everybody has something to say about Jell-O. It evokes childhood treats and church suppers and college parties. Some people hate it. Some love it.

When I had two potlucks pending recently, I put myself down for Jell-O, knowing people would laugh. Jell-O! But I wanted it to be surprising: not just any old bowl of jiggly gel, nor shredded-carrot concoction or whipped-cream confection. I wanted something fancy. 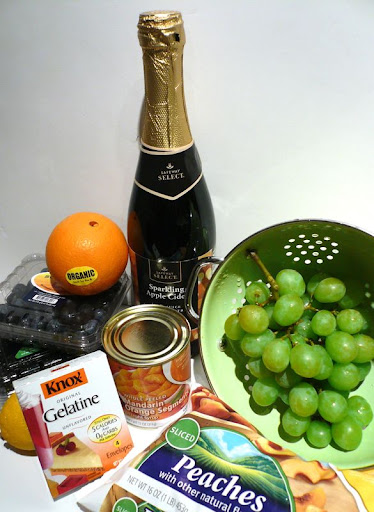 What I wanted to make doesn't involve the Jell-O brand at all, but gelatin and wine and lots of fruit: a fruit terrine, courtesy of Epicurious, with modifications.

Here's what you need: 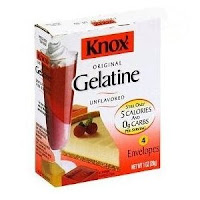 See, when you make all of those mistakes, here's what it looks like: 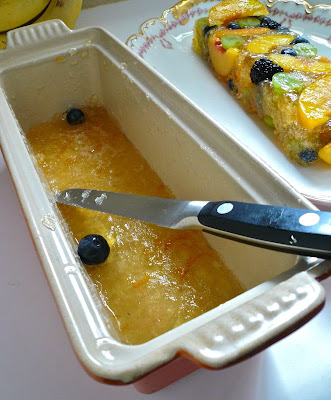 A thick rubbery layer of gelatin still stuck in the pan and a colorful but oddly textured fruit salad on the plate. 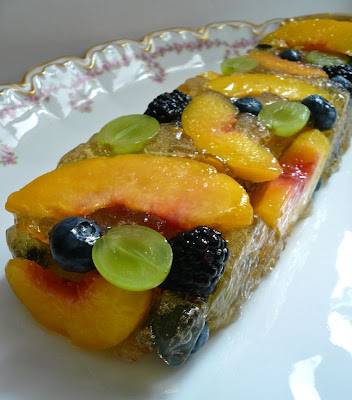 The cow-orkers at the Super Bowl potluck ate it to be polite, but it was definitely more eccentric than fancy. (And nowhere near as popular as the marshmallow-coated popcorn with cinnamon jelly beans. Seriously. That stuff was like crack. Must get the recipe.) 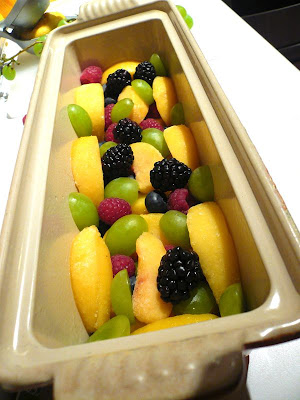 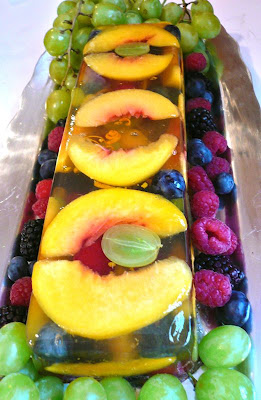 I wish I had a better photo than this, which I snapped rather hurriedly since I was running late. Even Manisha's cellphone pic looks better: 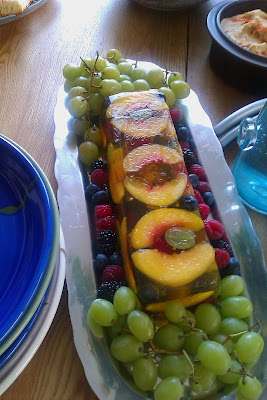 In any case, it was very gratifying to hear the oohs and ahs when I brought it in. Even better was its tastiness. The wine flavor and the fruit mixed well, and the texture was good. Now I'm looking forward to making it in the summer. It's so light and refreshing and will be fabulous with local fresh fruit. And despite my wordy instructions, it's really a snap to make.

Even if you've never had anything nice to say about gelatin, I guarantee you will get rave reviews for this fancy fruit terrine.
Posted by Kitt at 1:11 AM 7 comments

Fresh snow and a bright blue sky are always so uplifting. It helps when the temperature gets above freezing, too. We start out with our hats and gloves and many zipped-up layers. Once we've walked a bit, the gloves come off and the coats are unzipped. 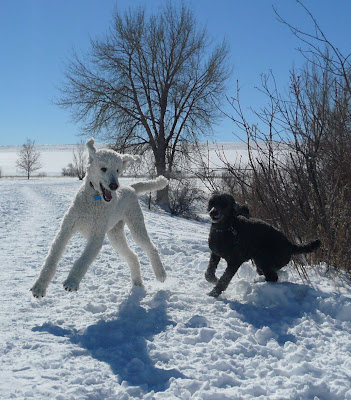 Lucy is harder to photograph well. She shows up as a black blob, and she's usually not as smiley as Jackson. But she's certainly just as happy to be there. 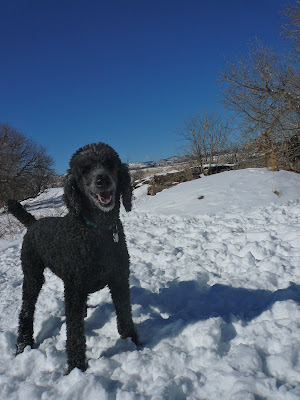 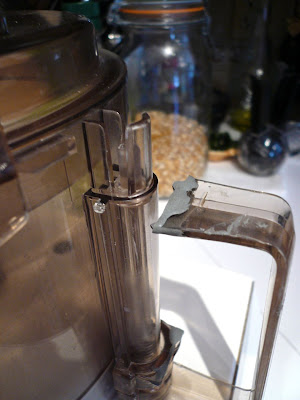 The Sergeant tried to Bondo J-B Weld it, without success. But I could still use it, and did.

Then a couple of days ago the plastic inner shaft of the main blade broke (I overloaded the bowl with frozen banana slices for single-ingredient ice cream).

Now what to do? I found a place online that has both bowl and blade, but together they would cost about $90 shipped. New food processors aren't that much more expensive. Still, I dithered, because it was my Nana's machine and also because I worry that "they don't make 'em like they used to." 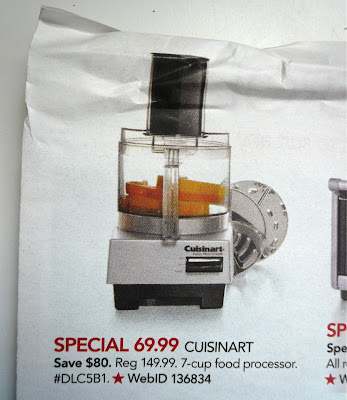