A tisket, a tasket 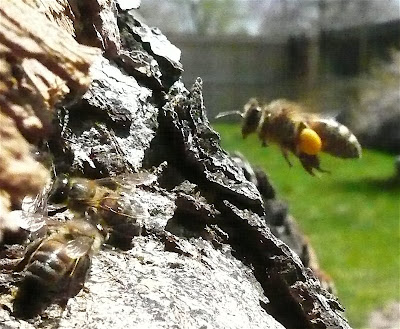 OK, so maxing out the ISO gets too grainy. But I'll show this one for the pollen basket. The bees mix the pollen they collect with, well, bee spit, and store it in their comb packed in layers of little disks. Later they mix it with honey to eat and to feed to babies. It's their main source of protein.
Posted by Kitt at 12:42 PM 6 comments 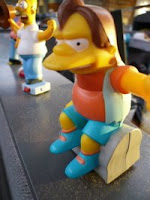 For a while I had a series of Simpsons toys lined up at my desk. My favorite was Nelson. But he had to be put away when he started yelling "Ha ha!" at random moments without anyone pushing his button.

Now Nelson has found a new life as a catcaller. Whenever he laughs, Reba comes running. I think he he still has a screw loose, though. He's only supposed to ha-ha once or twice. 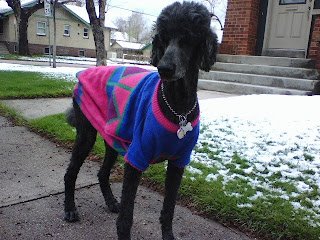 Sophie would like the snow to quit so she can stop wearing the dorky sweater.
Posted by Kitt at 1:13 PM 6 comments

I got a call on Friday from Vicki at To Bee Or Not To Bee. "Hey! I got all kinds of people coming in who found me through your blog! I need a web page. Can you make me one?"

After some noodling around with the Blogger template, I was able to create a decent-looking page with all the relevant info. And I also got her listed in Google businesses so she's at the top of the page for Denver beekeeping supplies.

In return, I got a full beekeeping suit! So I'm all set for extremes if necessary. I don't expect to wear it a lot, but I may be happy for it if the bees are grumpy.

For example, check out this guard bee checking me out: 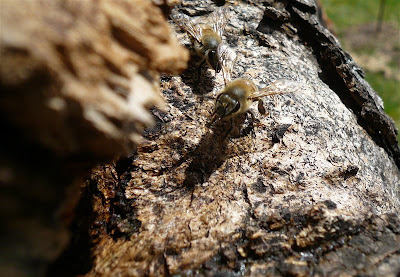 A fraction of a second later, "Bzzzzt! Get out of here!" 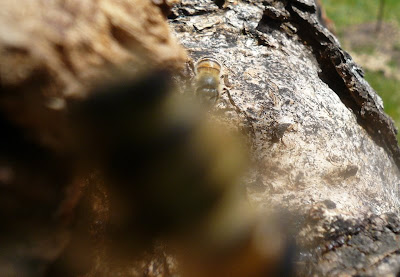 Actually, I wasn't even aware that happened until I looked at my photos. I was trying to capture a bee flying, but this was the best I could do: 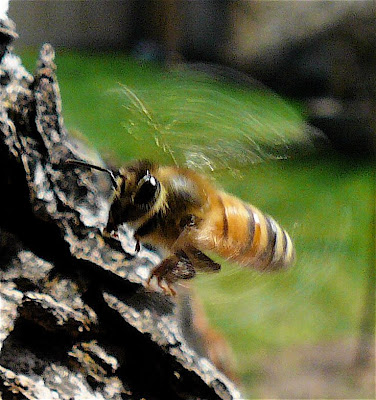 I need to fiddle with my settings and experiment some more.
Posted by Kitt at 11:01 PM 4 comments 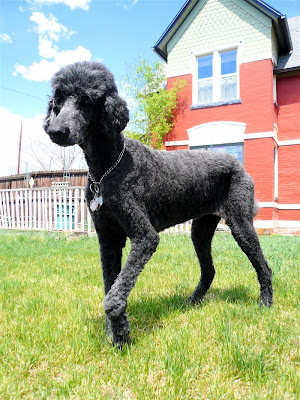 Sophie got her summer "do" yesterday. I opted for a more sporty look this time, with short ears. Last week was her 14th birthday. She got extra jerky treats.
Posted by Kitt at 9:51 AM 9 comments

Getting stung on the forehead reminded me that I needed to get a veil before swarm season. Bees that are swarming are at their most docile, being full of honey and lacking anything to defend, but having them bounce off your face can be a little disconcerting. And later I'll probably want one for working in the hive.

I would have gotten one at To Bee Or Not To Bee, but she was all out of free-standing veils (which also require the purchase of a helmet), so I went back to my original cheapskate plan: Army surplus.
You can spend a lot on bee clothing, and it may be that I decide later to get the full-on bee suit or jacket. But for now, the $9 veil on the right should do just fine. A baseball cap fits under it, and the wire hoop keeps the mesh away from your face. 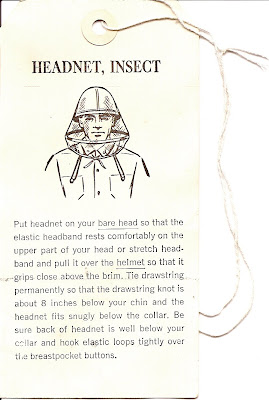 On the same page

I thought we were doing pretty well with our coordinated outfits the other day. The memo said "Wear green with stripes," but we each put our own spin on it (the sweater in the middle has racing stripes on the sleeves). 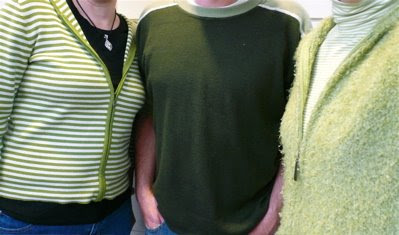 But then these two came along and stole the office-twin prize. 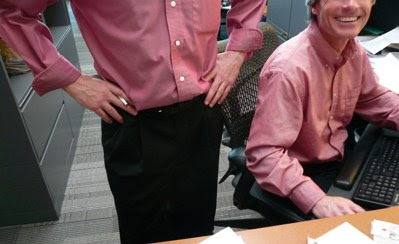 Click on the office memo tag for more on this group that clearly spends too much time together.
Posted by Kitt at 10:55 AM 0 comments

We took Sophie for a walk and she did OK but didn't like getting that wet. Then we went to dinner.

I used to get kung pao chicken to go from Crazy Asian Cafe all the time. It was right on my way to work, the portions are big enough for two or three meals for me (if I make fresh rice), and it's the best kung pao I've had in Denver so far. (And I've tried it from quite a few places.) I go less often since I moved and am trying to economize, but I should remember how good and affordable it is.

The folks who run it are from Dalian, in northeast China

(Port Arthur, if you know your history). When I first went to the restaurant they were very excited to learn I'd been to Dalian three times – once for Christmas, once coming home from Shanghai by sea, and once right after Tiananmen. Good times.

The menu at Crazy Asian is not just Chinese, though. Hence the name. Miso soup, pad thai, Vietnamese noodles. It's all good, but we stuck with my Chinese fave, kung pao chicken, with some shumai for a starter. 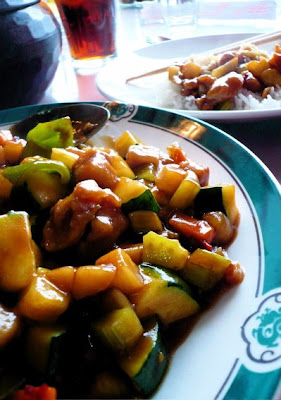 Boy, I love this stuff. It fortified us to come home and shovel the cement, and made a great lunch today, too, after more shoveling. 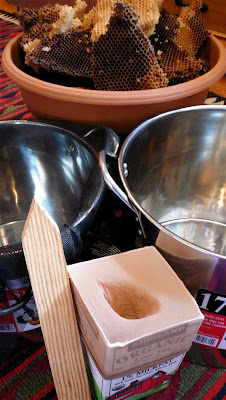 If you plan to keep bees in a top-bar hive, you will need some beeswax to draw a guideline down the middle of each bar. In the wild, bees build their comb any which way (but always plumb), while in a hive you want the combs straight on each bar so you can lift them out. Beeswax is also nice for making candles, salve and lip balm, among other things.

You can buy it, of course, but if you happen to have some comb, you can melt it down yourself and be sure it is pure. I found some sensible, step-by-step instructions here. You need a couple big pots, some screening, a waxed carton and knee-high nylons. Plus a bungie cord for securing the screen and something to stir with. Do not use pots or a spoon that you ever intend to use for cooking again. I got some super-cheap pots at Big Lots and used a gardening stake for a stirrer. 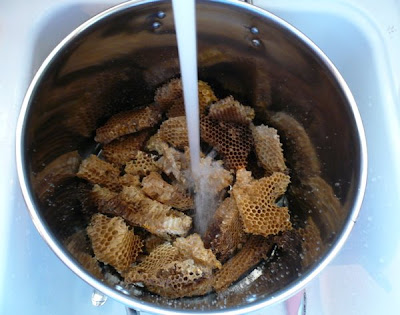 First you add water to the comb. You want a goodly proportion of water to comb, but not so much that there's any risk of the pot bubbling over and covering your stove with wax. I'm pretty sure that would be a really bad thing.
Bring the wax to a boil and let it boil for 30 minutes. You probably don't really need to stir it, but you will anyway, just to monitor its progress. Meanwhile, prep another pot outside with the screening and bungie cord.

I did not have an assistant to photograph the pouring, so you'll just have to imagine it. When I was done, I had this:

A pot of wax suspended in water and a pile of slumgum.

Yes, slumgum. Isn't that a great word? It's all the detritus from the comb that isn't wax. You don't want to think too hard about that. If you are processing mostly honeycomb, you will not get a lot of it.

It still has some wax in it, so it makes a good firestarter. I made slumgum patties (briquettes?) using a cut-up paper towel roll – my own invention, thank you very much.

Meanwhile, after sitting overnight, the pot of wax and water separated, with the wax floating on the top. It still had some sediment on the underside, which I rubbed off as much as possible in the water. The wax pieces went into a pot.I discovered in this process that you really want to have a much smaller pot for the second melting, especially if the air is cold. Beeswax melts at about 145 degrees F, but quickly sets up again and clings to the pot as you're pouring it, so a smaller pot is ideal. You melt the wax over very low heat. For the second batch I found a heavy aluminum one at Goodwill with a pouring spout.

And I should issue a warning here: Beeswax is highly inflammable. NEVER LEAVE MELTING WAX UNATTENDED.
Pour the melted wax through knee-high pantyhose into a waxed container such as a milk carton. I used a half-gallon carton the first time, and a quart one the second. Let it cool and harden, then peel away the carton. 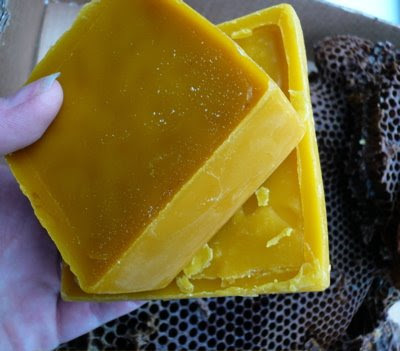 It smells really nice, and should be enough for my needs. You'll notice that there's not a lot of it. Yes, rendering that entire log full of comb yielded just this much wax (and a whole lot of slumgum). It's amazing how bees have evolved to produce this stuff and use it so efficiently.

Most cats are happy to be invisible to Sophie. 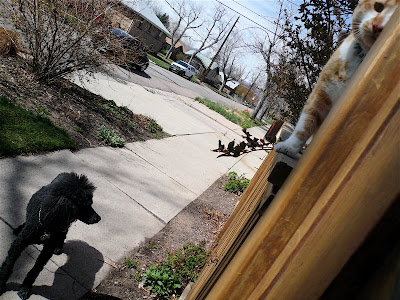 But this one lives with a great Dane and a Lab. 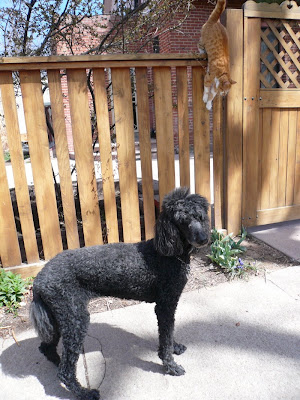 He or she wasn't about to be ignored. 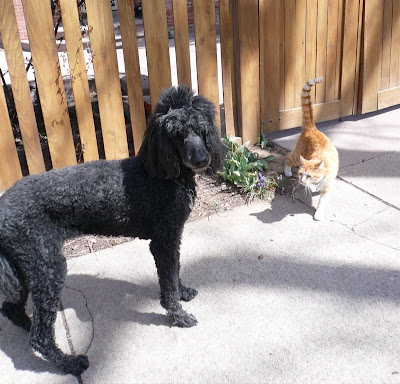 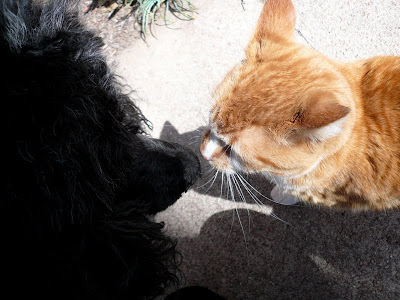 Invisibility ain't all it's cracked up to be.
Posted by Kitt at 2:02 AM 8 comments

I know, I know, amaryllis are supposed to bloom at Christmas. 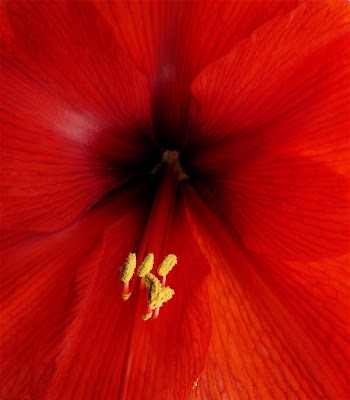 But I stashed them in the basement rather belatedly for dormancy, then forgot about them until a month ago. 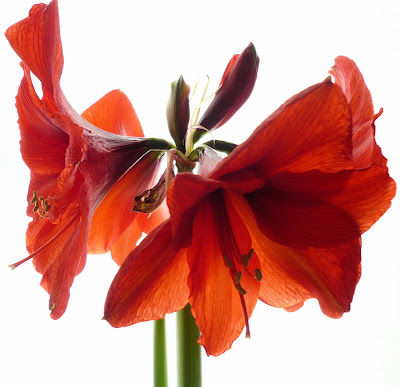 They're apt for Easter, anyway: "The angels came to roll away the stone before His tomb."

Even if you're not a Christian, you pick this stuff up.
Posted by Kitt at 10:20 AM 6 comments 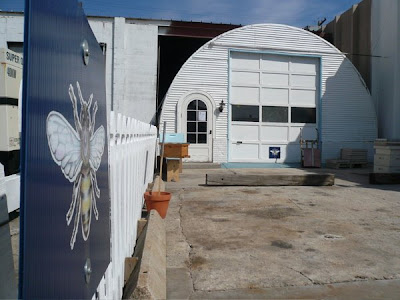 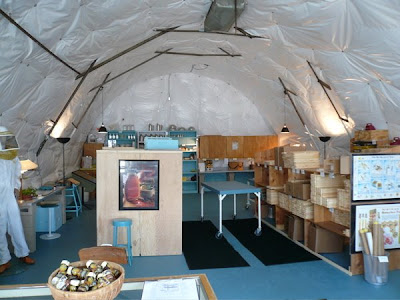 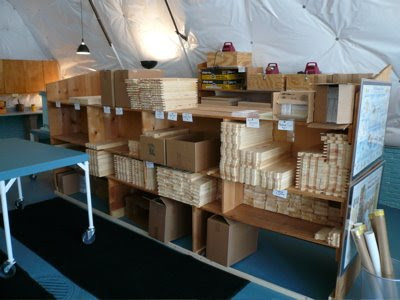 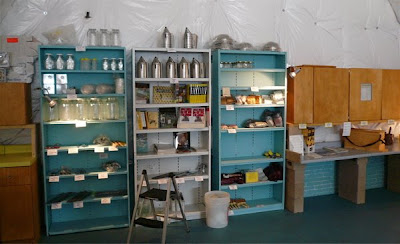 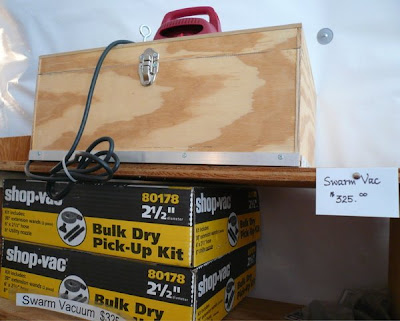 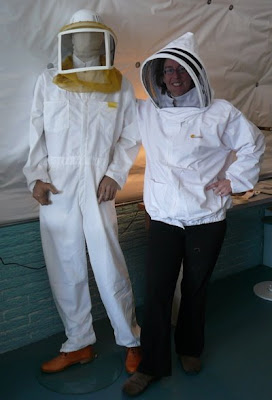 P.S. Vicki was delighted to get some visits based on this post and asked me to put together a simple website for her that Google can point to. Here it is.
Posted by Kitt at 12:25 PM 9 comments