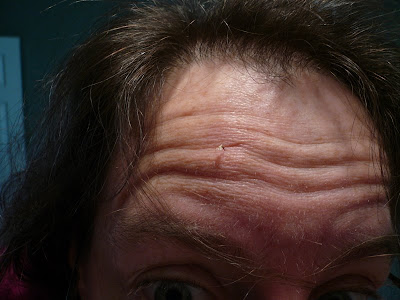 I've never been stung by a bee before that I know of, so I had no idea if I was allergic. Supposedly even tests by an allergist aren't all that accurate, so you're best off just waiting until you get stung to see.

Looks like I fall into the first category, minus the eyelid-swelling, happily. Also the category of should-have-known-better. I went to take more pictures in front of the hive, but I didn't follow my own rule of always wearing a hat. The bees saw my dark hair looming in front of their door and bzzzt! one nailed me, right next to the scar I got from falling off my bike when I was 7.

Frankly, it didn't hurt all that much. I scraped the stinger off with the blade of a knife (to avoid squeezing more poison in) and put a dab of bleach on the spot. An hour later, there's a bump about the size of a mosquito bite, if that, and it doesn't feel like anything.