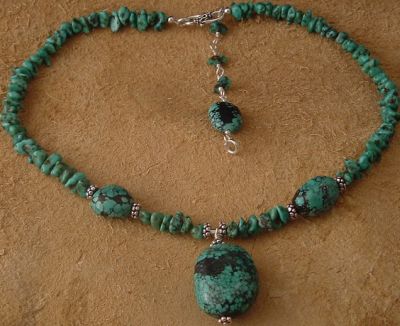 While looking for my friend Szarka's blog for my previous "tag" post, I stumbled across another Szarka's blog of her jewelry designs. I ended up ordering this lovely turquoise nec 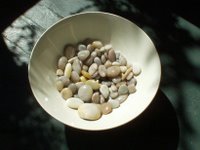 klace, and also sent her some polished beach stones from Lake Michigan, one of which she wrapped beautifully in silver wire and sent back.
Now I'm all jonesing to take a wire-wrapping class! Especially since I have more rocks in the tumbl 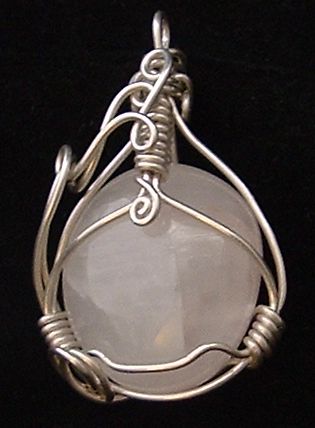 er and brought a bunch back from my most recent visit to Wisconsin.

That would be kind of like knitting, wouldn't it? In a crafty, twisting-and-knotting, making-pretty-things sort of way.
Jewelry photos by Szarka
http://szarka.blogspot.com
Posted by Kitt at 12:13 PM 1 comments 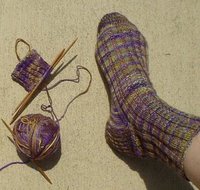 I guess on a knitting blog I really need to post pictures of actual knitted objects, actually knitted by me! I've had a hard time concentrating lately, so I've slowed down a bit, but I am getting somewhere on sock No. 2. With vacation coming up, I hope to finish it soon! Especially if the airlines are still letting needles onboard.

("Bruise socks"? you're wondering. Yeah, because the colors are just like the stages a bruise goes through: purple, then sort of greeny-yellow, then yellow. It makes me laugh, because of course those colors look much nicer on a sock than on ... your eye! WANNA MAKE SOMETHING OF THAT?!? I didn't think so.)
Posted by Kitt at 1:02 PM 1 comments 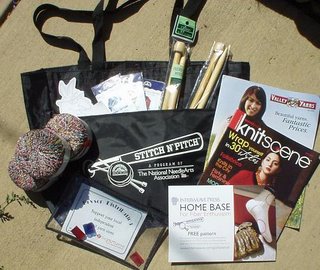 So I finally got around to taking a photo of the goodie bag from the Colorado Rockies Stitch 'n' Pitch game. As I understand it, the ballclub was a little dubious about the concept, so it wasn't promoted as well as it might have been. (I didn't hear about it until right before the ticket deadline).

On the plus side, there was a good showing of die-hard needle arts and ballpark enthusiasts, who were rewarded with lots of swag: A roomy tote with the Stitch 'n' Pitch logo, three skeins of novelty yarn, two sets of size 17 wooden needles, three mini cross-stitch kits, a clear plastic notions bag with needle protectors, knitting magazines, coupons, a baseball sock knitting pattern, a llama notepad.

It was a perfect night. Though the temps were in the 90s in the afternoon, we were seated in the shade, which in Colorado makes all the difference. And once the sun went down it was lovely to sit there and knit and enjoy the ballpark and all the camaraderie among the knitters sitting all around us. The Rockies played the San Diego Padres. I confess I didn't follow the game very well. The Rockies lost, 4-2. I finished a sock and started the next one. Barb took a group photo. There should be more coming soon from Kathy, who owns the Yarn Studio in Minturn (my first knitting purveyor. She's in the purple cowboy hat, below right). I'm looking forward to next year's game! 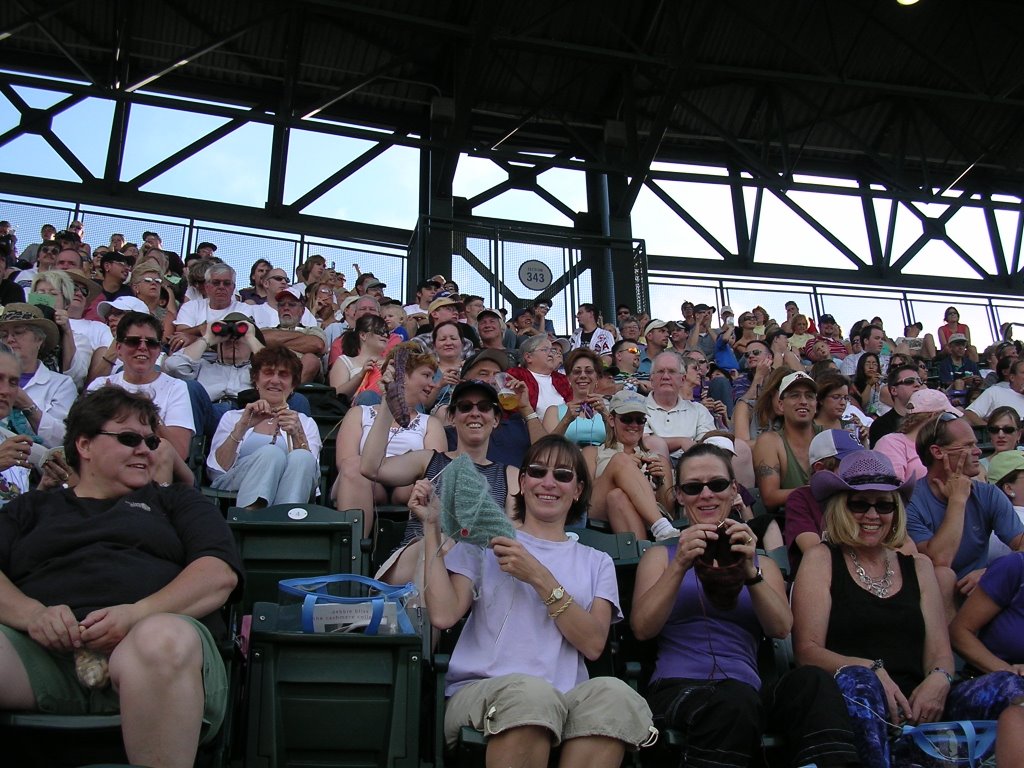 Long Time, No Post. Thanks to Barb (who clearly took up the blogging baton with a vengeance while I've been slacking) for nudging me with a "tag." As far as I can tell, that means I answer a set of questions and then "tag" someone else. OK, I'll play!

(I wonder if Szarka knows there's another one out there with a blog: http://szarka.blogspot.com Lovely jewelry. I'm tagging you, too, Mystery Szarka.)

And another Denver knitter, Little Ginger!
Posted by Kitt at 10:52 AM 4 comments