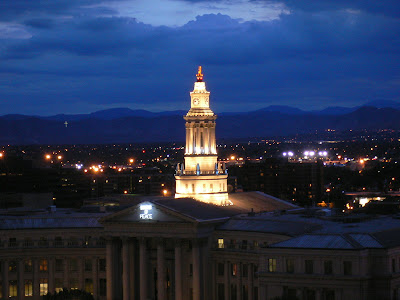 The Denver City and County Building has been lit with white lights lately (they change the colors every so often), which looks very pretty, especially against the mountains still faintly backlit after sunset.

To the left you can see the Mount Lindo Cross, the largest illuminated cross in the U.S., at 393 feet tall and 254 feet across (click on the photo to see it larger). From the Cemetery Blog:

George Olinger Sr., son of Olinger mortuary founders, John and Emma Olinger, bought Mount Lindo in the 1930s. He later sold it to Francis S. Van Derbur, who was married to his daughter, Gwendolyn. Van Derbur originally intended to develop the mountain, but instead he made it into a cemetery in 1963. His father, Francis C. Van Derbur, expressed an interest in being buried on Mount Lindo with the spot being marked by a cross. Francis S. had the famous lighted cross installed on the East side of the mountain so his mother, Pearl, could see it from her home in Denver’s Park Hill neighborhood.