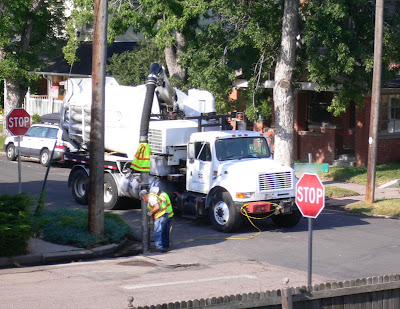 I'm as cynical about government services as the next person. Case in point, the stop sign you see here on the right was just replaced a couple of days ago, though I could see nothing wrong with the old one, whereas the street sweeping sign around the corner has faded to complete illegibility. Any dope can see and obey a stop sign, however faded, whereas the street sweeping sign contains vital information in small print: which day you will get a ticket if you park there.

OK,, maybe not so dumb, since more tickets = more money for the city.

But here is also a sign that something is indeed working correctly. A few nights ago we had a downpour, and hours later there was still a mighty river of runoff coursing down the side street and then onto mine, a deep and wide current running above the tire rims of the parked cars.

It cleared up sometime later, having apparently found a clear storm drain at last. I thought about calling the city, but it was late, and then I forgot about it.

Well, someone must have called, because this morning the Sux-M-Owt truck was making its way down the street, clearing the drains. Loud but welcome!

Sure, you may argue that floods = less money for the city if they result in lawsuits, but still.

Does this qualify as the most boring blog post ever?
Posted by Kitt at 8:30 AM