We were in the mood for Italian and ended up Gennaro's Restaurant and Lounge on South Broadway. I'd never been there before, though I took this photo a couple of months ago when I was getting my car washed next door. Great sign! They've been in that spot since 1961. It's very Old School, as the sign and the lounge decor suggest. 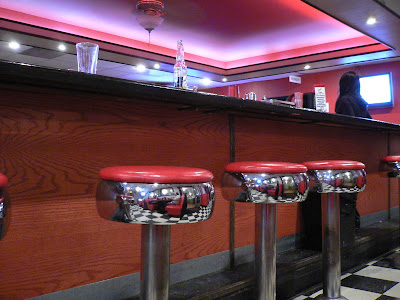 The restaurant side is more brightly lit, and all four-tops with checkered tablecloths. Deserted, too, so we opted for a booth in the bar, which was marginally more populated with some middle-aged folks getting their drinks on, and a hipsterish female staff.

I didn't take pictures of our appetizers (a combo of fried mozarella sticks, onion rings and poppers clearly from Costco) or the "Old Timers" white pizza (quite possibly frozen). Should've gotten the "garlic knots" for an app instead: they gave us a couple when we sat down, and they were very tasty.

But I have to say, while the food was "eh" at best, the service was stellar: very friendly and attentive, and we could hardly get to the bottom of our Cokes before they were refilled. 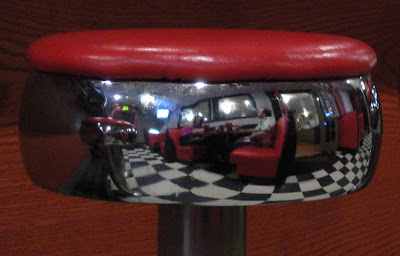 And really, how can you not like barstools you can see yourself in?
Posted by Kitt at 9:40 PM