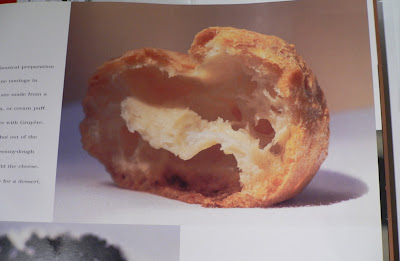 Almost a year ago I ran across a new food blog called French Laundry at Home, in which Carol is cooking her way through the French Laundry Cookbook. The French Laundry is a restaurant in the Napa Valley whose fame is of almost mythical proportions. Someday I will eat there, I hope, and in the meantime, there's the beautiful, oversized cookbook, written by chef Thomas Keller and Michael Ruhlman, who is author of "The Making of a Chef," "The Soul of a Chef" and many other fine books. (He has a new book, "The Elements of Cooking," that I want to get. I also enjoyed his book "Walk on Water," about pediatric cardiac surgery ... yes, he's not just about food.)

Anyway, Carol's blog. The first post I saw there was about making gougères. Mmmmm, gougèrrrrrrrrres. Steamy cheesy bites of goodness. "I can do that," I thought. "I may not be able to make anything else in the book, but these look doable." 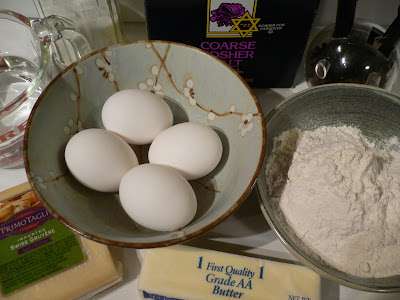 Simple ingredients: Gruyère, eggs, flour, butter, water, salt, pepper and a pinch of sugar.
You melt the butter in the water with the salt and sugar, dump the flour in and stir for a couple of minutes. Then you toss the result in the mixer, add eggs, cheese and pepper. 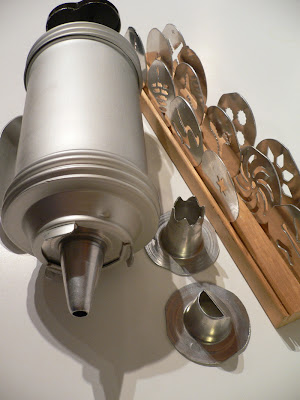 You're supposed to pipe the dough with a pastry bag, which I don't have. But I have a cookie press! Same thing, but with hard sides, right?
It worked great! But if you're making these, don't go by the size here, as they are too small, I discovered. They should be about twice as big. And you should use a bigger tip, which I will do next time. A little grated cheese is sprinkled on top of each dollop.

So here's the "grrrrr" part: They didn't puff! You put them in the oven at 450 for a few minutes until they puff, then lower the heat and bake for another 20-25 minutes. But the first batch just came out tough and not puffy, and the second batch (pictured below) was a little puffier, but still nothing like the book. 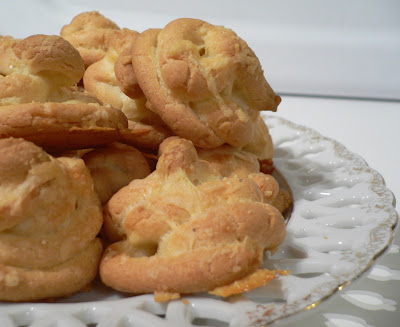 Was it the smaller tip? The altitude? Did I beat the dough too long? Is my flour not fresh enough? I have no idea. I will have to Google around for other gougères recipes and see what variables there are.

Also? These were too salty for me. The cheese is salty to start with, and adding a tablespoon of kosher was too much. I think you could get away with just a pinch.

I want to make these for a party, so I'm glad I decided to do a test batch first! I don't regret the time spent, as it's fun just to muck about in the kitchen and learn something.
Posted by Kitt at 12:24 AM