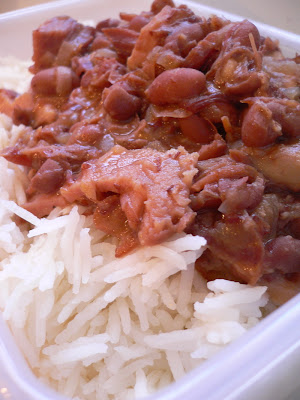 This may not look very appetizing, but trust me, it's quite tasty. I started it Sunday morning in the crockpot and left it to cook until Monday morning. The ingredients: one leftover hambone, split (with a hammer), a couple big chunks of ham, a pound of small red beans soaked overnight and rinsed, a large minced onion and about 5 cloves of minced garlic, and water to cover. I tasted it Sunday night and it was a little bland, so I added a tablespoon of Worcestershire sauce, a couple of bay leaves and a few good shakes of Tony Chachere's More Spice seasoning.

Monday morning, I cut up some more leftover ham in bite-sized chunks and tossed it in for about an hour. This was key, I think, because the ham already in there had leached out all its meaty goodness into the broth. I fished those bigger chunks out and threw them away. So I had a nice meaty broth plus pieces of ham that still tasted hammy. I also mashed some of the beans in the pot against the sides to make the broth thicker.

If you want, you can throw in some sliced chorizo or andouille sausage instead of or in addition to the fresh ham, or some spicy sauteed shrimp just before serving. If you like spicy, add tobasco or Crystal hot sauce.

I just had time to toss it over fresh rice in a Tupperware container to take it to work. A serviceable – if not elegant – meal!
Posted by Kitt at 10:29 AM