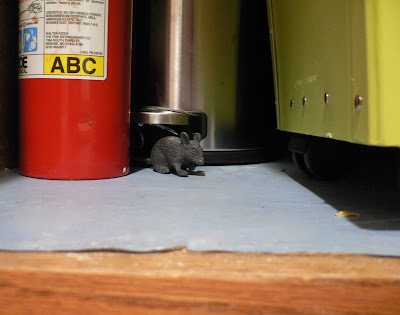 The other night I went to empty the garbage bin under the sink and discovered ... a mouse! I felt a brief jolt of shock and said, "What the ...?"

She had just crawled into bed but was still awake. "I wondered if you were ever going to see it! It's been there for days. Call it payback for that tattoo caper."

See, about 15 years ago, Mom came to visit without Dad. Before she arrived, he sent me a packet of temporary tattoos. "Put one on and see if she notices."

I put a little rosebud on the back of my hip, just above the panty line. Not obvious, but where an observant mother would surely notice it if she happened to see her daughter getting dressed.

But several days went by without a word. "She's either blind or biting the hell out of her tongue," I told Dad on the phone. Sure enough, as soon as she got home, he got an earful!

"She got a tattoo!" Mom wailed. "But I was damned if I was going to say anything!"

He laughed and laughed, then fessed up. Oh, was she mad! But relieved. And a few weeks later when they went to a costume party, she was the Tattooed Lady, covered with rosebuds of her own.
Posted by Kitt at 12:05 AM