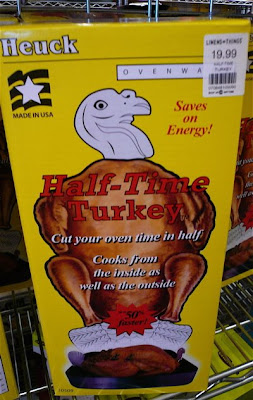 "Did you hear about Roger?"

"He got canned after the boss saw that Half-Time Turkey package design."

"Well, if you're going to make the turkey look like it's sitting on the pot with its pants around its ankles, you've gotta face the consequences."

"Yeah, and it's too close to Thanksgiving to do over. We have to ship it as is."

I always learn interesting things when I research the stuff I find. For example, the history of this turkey's distributor, the Mason, Ohio-based M.E. Heuck Co.: 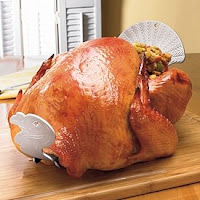 Mathilde E. Heuck, a renowned cook and homemaker, once traveled the world seeking ideas and recipes to improve the American kitchen. In 1922, she finally found the kind of brilliant idea she was looking for. Taking a few nails and a piece of string from her husband's tool box, Mathilde created the famous Heuck Turkey Lacer. This innovation made the preparation of delicious poultry dressing easier for cooks and homemakers everywhere. Millions of Turkey Lacers have been sold over the years, making it one of Heuck's most popular products. 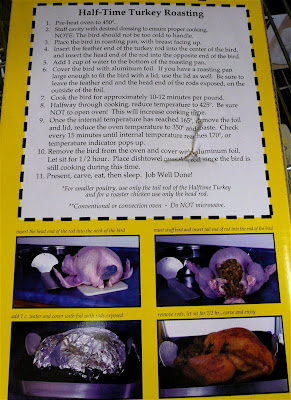 The company sells pretty much every turkey-cooking accessory you can think of, from turkey lifters to racks to basters to pop-up timers. All of them entirely sensible items.

This gadget, though, makes me wonder. It's basically two strips of aluminum that you put inside the turkey to conduct heat and supposedly cook the bird faster. Do you think that really works?

I can't find the Half-Time Turkey on Heuck's website and I suspect it's been discontinued.

Or maybe it's just on hiatus for a package redesign. I hear Roger is getting help – and changing careers – after being found with his head in the oven.
Posted by Kitt at 11:55 PM