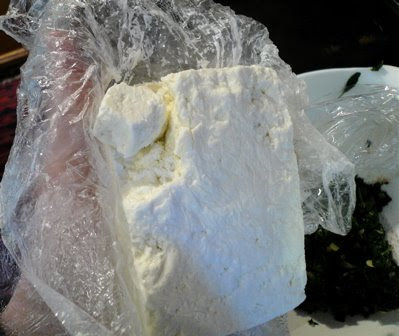 When you have some really fabulous feta cheese, spanakopita is a great way to showcase it. Last week I was at an Eastern European market, where I picked up some Bulgarian sheep feta. I meant to post about the market, but gosh, with the holidays and all, I've gotten behind! I'm sure you'll understand.

Anyway, this feta is super-pungent and salty. It's too strong and salty for me to eat it by itself, which is saying something. But I figured it would be quite yummy mixed with spinach and wrapped in phyllo. 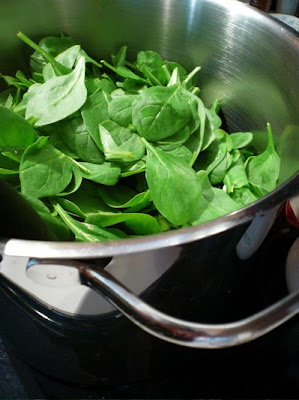 This is a free-form recipe. You'll need some phyllo dough. If it is frozen, it should be thawed in the fridge overnight.

I had a jumbo bag of spinach from Costco. Maybe 2 pounds' worth. I sauteed half an onion, minced, and a clove of garlic, also minced, in butter, in a large stockpot. Then I added most of the bag of spinach and stirred it around a bit, covered the pot, lowered the heat and let the spinach wilt down for 10 minutes.

I grated some fresh nutmeg into a bowl and added about a quarter-pound of feta. If it were a milder feta, I would use more of it. 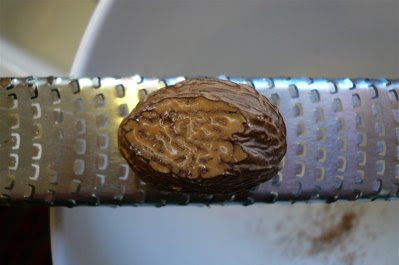 When the spinach was wilted, I spun it in the salad spinner, pressed it with a spatula and spun it again. My other option was to let the stuff cool and squeeze the excess juices out. But I'm impatient. Another hint for the impatient: Scissors are an efficient way to "chop" cooked spinach in a bowl. 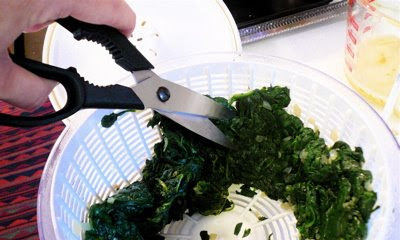 I mixed the spinach with the cheese and nutmeg, then prepared the phyllo. Keep the stack of phyllo sheets covered with a damp dish towel. Melt a stick of butter. Lay out one sheet of phyllo and brush it with melted butter. Put another sheet on top and butter that. Cut the sheets in strips about 2 1/2 inches wide.
You just roll it up in a triangle like a flag. I even made a little video. I'm kind of sloppy (again with that impatience!) but you get the idea.

I was overly generous on the filling; I rolled three batches, or six sheets of phyllo, which fit on one baking sheet. You could use less filling and make them smaller, for appetizers. 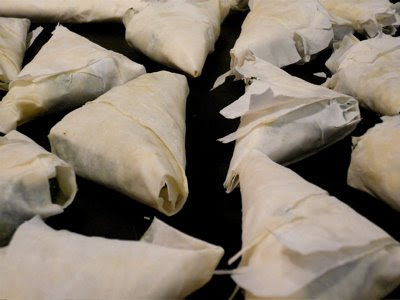 I brushed the tops with more butter and baked them for 25 minutes. I ran the broiler at the end for a minute to make them nice and golden on top. 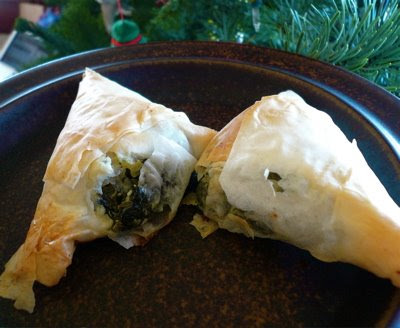 I was running late for work, so the final shot was hasty. And then I passed them all out to the cow-orkers and that was the end of them. Everyone said "Yum!"
Posted by Kitt at 1:01 PM