Up close and personal

Do you ever get the feeling you're being watched? 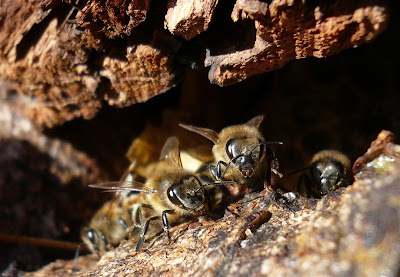 The girls were out earlier today exercising their wings. I could see them from my window. When I stopped by later, though, just a few were hanging out on the stoop.

"What are you looking at?" they seemed to be saying.

I told them I was just there to admire them, and they said, "Oh, well, OK, then. We'll go back to grooming each other." 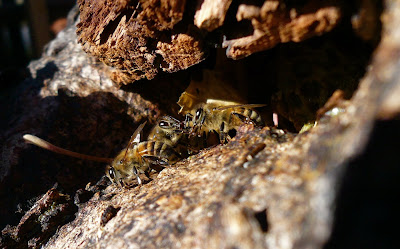 If you click on the photos above, I left them large-ish so you can see them close up.

Most any bee you're going to see will be a working girl. The workers live about six weeks, and they have a set series of tasks they progress through as they age: Cell cleaning, brood incubation, feeding larvae, grooming and feeding the queen, hive cleaning, comb building, honey ripening, guard duties, air conditioning and foraging. 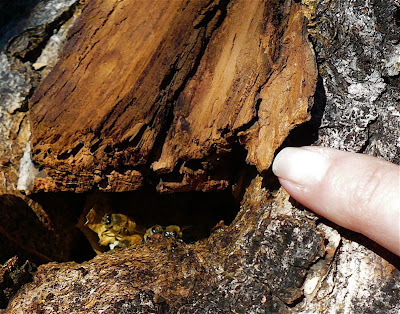 The air conditioning is important! I've realized that with our warm days still, insulating the hive is not such a good idea, especially with plastic over the top. Hives need to avoid moisture build-up inside.

So I'm going to put a slightly elevated wooden roof on instead (to keep snow and rain off), and just insulate around the hive when we have cold snaps.
Posted by Kitt at 9:18 PM