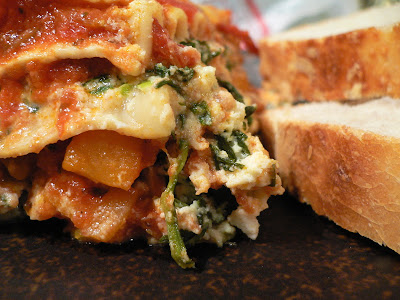 The other night I had an unexpected free hour before I needed to go to the airport to pick up my guest (flight delayed), so I swung by the grocery to get some beer, cheese and crackers for us to snack on this weekend. While I was there, I thought, why not get stuff to make lasagna?

I've been craving lasagna lately, and wanted to make a big pan of it so I could freeze some for work dinners. This took about 40 minutes to throw together, and would've taken less, except the butternut squash needs time to roast. It was all assembled just in time to toss it in the fridge and head out the door.

So you'll understand why I didn't take photos of the process. But I'm sure I'll make it again. 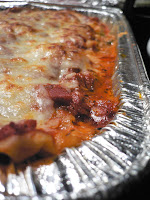 I use a big foil roasting pan (cheap from the grocery, and reusable). I assemble the lasagna in the middle of it, using three noodles, and there's enough room around the edges so it doesn't overflow. I don't prebake the noodles, and I use jarred sauce, which really cuts down on the prep time.

The cheese is a big tub of ricotta with a bunch of shredded parmesan and a couple eggs mixed in, then a package of frozen, shredded, chopped spinach, thawed and squeezed.

The meat is 1/2 pound each of pork and veal, browned and drained. 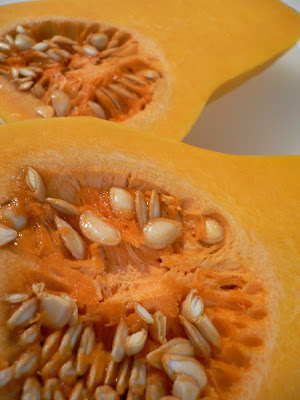 I used half a butternut squash, cut in small dice and roasted with a drizzle of olive oil until tender and a little caramelized.

The filling goes like this: thin layer of sauce, noodles, layer of cheese, layer of roasted squash, a little sauce, noodles, cheese, meat, sauce, noodles, sauce. Cover and refrigerate to bake later, or bake covered at 350 for about 45 minutes. Take the cover off, sprinkle on mozarella, and let it bake another 15 minutes or so.

I put on so much mozarella that I ended up turning the broiler on for a couple of minutes to brown it at the end.

The bread is no-knead parmesan. The lasagna came out, the bread went in, and it was all served hot.

And now I've got 10 future dinners ready in my freezer!

(P.S. You might also try lasagna with asparagus, chard and queso fresco.)
Posted by Kitt at 3:12 PM