José González at the Fox 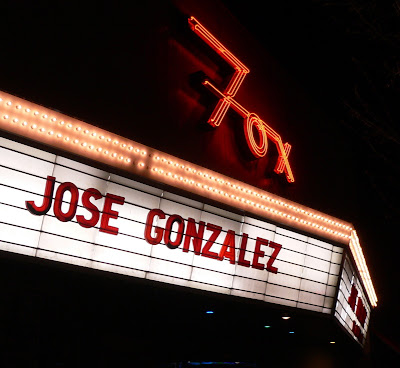 I don't go to concerts very often, so it's funny that the two I've been to in the last six months have both been José González. Last October he was at the Bluebird. But my friend Jenny called me up yesterday and said, "Let's go!" So we cruised up to Boulder and had a very nice dinner (more on that later) and took in the show.

Mia Doi Todd was the opener. She has a lovely voice and some amazing guitar skills. 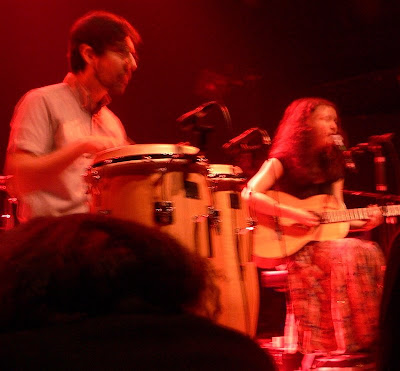 We stood in the front for a while (hence the wobbly photo – nothing to brace the camera on for a long exposure), but then moved back to where we could lean on a railing. It's tiring to stand on a concrete floor for so long! Or maybe we're just getting old.

As they were setting up for José González, the room began to fill with fake smoke, which I thought was odd. Maybe they were trying to invoke the nostalgia of the days when you could smoke during shows? (Not that long ago.)

But once the music started, the reason became apparent.

He had some pretty dramatic lighting effects going on, with whole arrays of lights in back that changed colors and rotated, sending striated beams across the audience. They must have hired a really good lighting designer. It was impressive without being overdone.

However, I have to wonder about being exposed to that smoke stuff night after night. It's got to be hell on your lungs and vocal cords even if you're not singing.

But the music, of course, was brilliant.

Here's José González's website. Warning: It's all Flash, which is obnoxious to me, but you can listen to some of his songs there.
Posted by Kitt at 1:04 PM