After viewing yesterday's Nutella-fest, you may feel the need for a little detox. Feast your eyes on this! 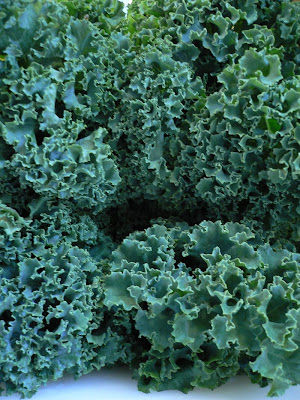 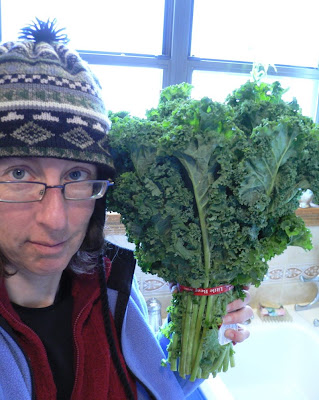 At the grocery store on Saturday night I felt a hankering for some greens. I really wanted chard, but they were out. Instead, I found this fabulously huge and healthy bunch of kale for the whopping price of $2.

It's as big as my head! And, it matches my hat.

I'd been seeing people rave about roasted kale, so I thought I'd try that. 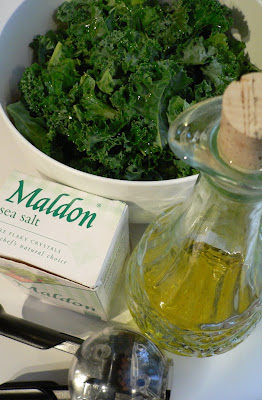 It's very simple. Tear or cut your kale from the tough stems in chunks. Doesn't have to be too small, since it shrinks down when it cooks. Rinse it thoroughly and spin it dry or pat it with paper towels. Toss it with a splash of olive oil and a little salt and pepper. You can add garlic, or lemon zest, or a little sesame oil. But I opted for plain-Jane to start with. Spread it in a foil-lined pan and bake in a 400-degree oven. After 5 minutes, toss it a little, then keep checking it every few minutes. Some people like it more green, and some more browned and crispy. I took it out when it was still a little of both. It's a very interesting flavor and texture! Rather on the chewy side. I think I like it crispier, so I'll let it cook longer next time. Makes a good snack!

But I didn't use all of it. How could I? BIG AS MY HEAD! What I really wanted was some sauteed greens to put on pasta. 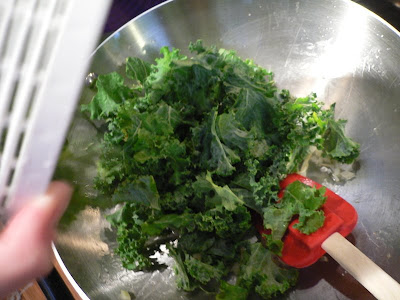 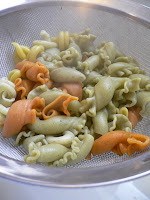 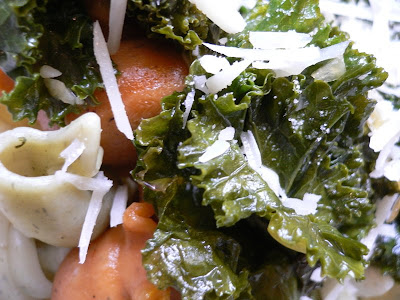 There was a hint of nutmeg or maybe cinnamon in the pasta that worked nicely with the slightly bittersweet greens. And a sprinkle of shredded parm on top is de rigueur for me. Tasty!

And I still have some kale left to try roasting it again.

(P.S. from Tuesday night: I just roasted the rest of it, and I believe the trick is to leave it in the oven much longer than you think you should. I didn't time it, but I'd say 15 to 20 minutes, tossing occasionally. Much better! Crispy and crunchy but still with a little bit of chewy.)
Posted by Kitt at 11:25 AM