My friend Beeb went to Cambodia, and brought me back something much nicer than a lousy t-shirt: 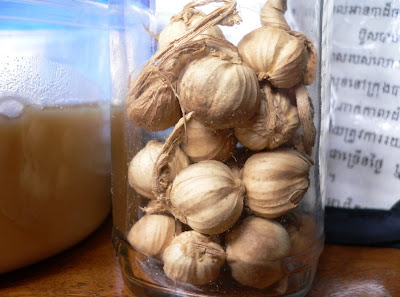 A jar of cardamom pods and a container of palm sugar that she watched being made.

The cardamom has many uses, from a coffee flavoring to spicing up curries and pilafs, and even some Scandinavian pastries.

Palm sugar I've seen in solid form (usually sold in bricks, discs or cones in Asian groceries), but I've not encountered the honey-like version before. It makes sense, though, as it is prepared just like maple sugar, by boiling the sap down. First it's a syrup, and then solid.

I have some ideas for using the cardamom, but what's the bext way to use the sugar? Anyone have any ideas?

The backdrop for the photo above is the longer-lasting portion of Beeb's gift: a messenger bag made from Cambodian newspapers! I love it. 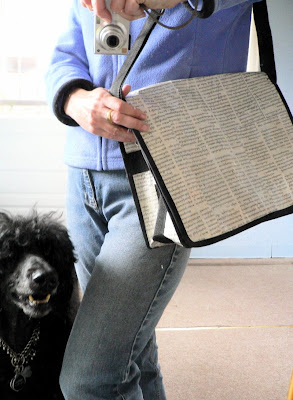 Sophie just wants to know if there are treats in it.

I wonder what articles they used? (I'll have to get a scan later of a Korean Christmas card I got that uses an English-language newspaper page as a backdrop. It's very festive until you look at the stories, and they're all about murders and tornadoes.)
Posted by Kitt at 11:15 AM