Then a friend who wears an ankle brace asked me to make her a toeless sock to wear as padding -- much like the pedicure socks in the current Knitty. I knitted the thing three times, but each time, the sizing was off. Finally, she said it fit. She was fibbing, but she didn't want me to keep ripping it out. She decided to shrink the sock herself, with some ill-formed notion that hot water would do the trick. She put the sock in a pot of water on the stove. 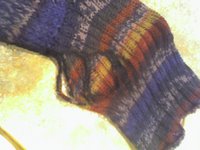 I have since instructed friend that she can find cheap six-packs of athletic socks at Wal-Mart and cut off the toes.
Posted by Kitt at 12:29 AM