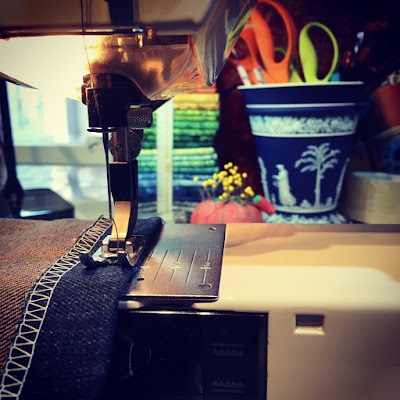 I had some work-work to do in the morning, and this is mostly what my afternoon consisted of: hemming the Sergeant's pants. I'm still pretty slow and methodical when it comes to sewing, but I managed to get them done (three pairs). And they're mostly cheap jeans from Costco, so the stakes aren't very high. 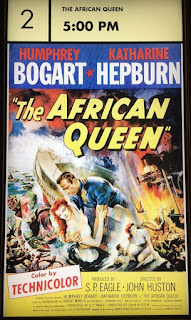 One of the needle threads on the serger kept breaking and I couldn't figure out why. I'll have to fiddle around with it, maybe replace the needle. But it works fine with three threads instead of four, so I just kept going.

Then we went to showing of "The African Queen," which is such a classic, lovely movie. They played a clip of Katharine Hepburn on the Dick Cavett show beforehand that was delightful. You should watch it.

The Sergeant, surprisingly, had not seen the movie before. He enjoyed it.

Then we came home and had Buttery Breakfast Casserole for dinner that I had assembled yesterday. Plus salad. The casserole is very tasty and rich, and would be good for a brunch gathering.
Posted by Kitt at 12:12 AM